Oil bound paints sometimes fail when used on certain building materials. When an acid and alkali react together, a salt is formed. If the acid is fatty such as linseed oil, then the result is soap and water. Many building materials such as lime mortar and plasters, Portland cement and asbestos cement develop alkalies. If such surfaces are coated with oil bound paint particularly in the presence of even small quantities of moisture, saponification will take place. The paint may blister in a mild attack or slow yellow-soapy runs in a sever attack.

Loss of adhesion can occur through a number of other causes. The effect may be slow and appearance of blistering, peeling or flaking of the paint film. Repeated condensation on certain types of paint can cause swelling and shrinking of the binder particularly when freshly applied.

It could also be caused by defects in the surface which is being painted particularly where gypsum plaster has dried out before hydration is completed resulting in a powdery surface. This same fault may also cause delayed expansion of the plaster. Very smooth surfaces such as glazed tiles may suffer from loss of adhesion with certain primers. Alternatively high section of a surface can remove too much of the binder from a paint. 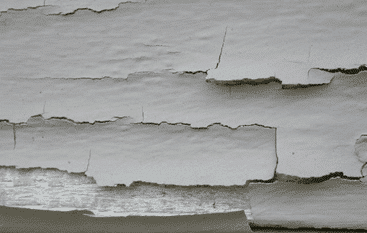 Efflorescence is when associated with the painting of bricks and usually takes one of four forms.

2. White films due to calcium carbonate or hydroxide

3. Potassium salts which can cause hard glossy patches.

4. Yellowish green stains produced by the presence of chromium salts.

Most of these problems can be avoided if water thinned paints are not used.

ADMIN
Gopal Mishra is a Civil Engineer from NIT Calicut and has more than 10 years of experience in Civil Engineering and Construction. He is the founder of The Constructor.
Previous article DISINTEGRATION OF WBM & ASPHALT ROADS
Next article THE TIME VALUE OF MONEY