What is Pumped Concrete? Types of Concrete Pumps and Selection

Home / Concrete Technology /What is Pumped Concrete? Types of Concrete Pumps and Selection

What is Pumped Concrete?

Pumped concrete is the concrete which is transported to heights by means of pumping using concrete pumps. This method is used where large quantity of concrete work is involved at greater height, where other means of transporting is not easy to do.

Concrete pumps have been known for more than 50 years. In modern times, large quantities of concrete can be transported by means of pumping through pipelines over appreciable distances, often to locations that may not be easily accessible by other means of delivery. 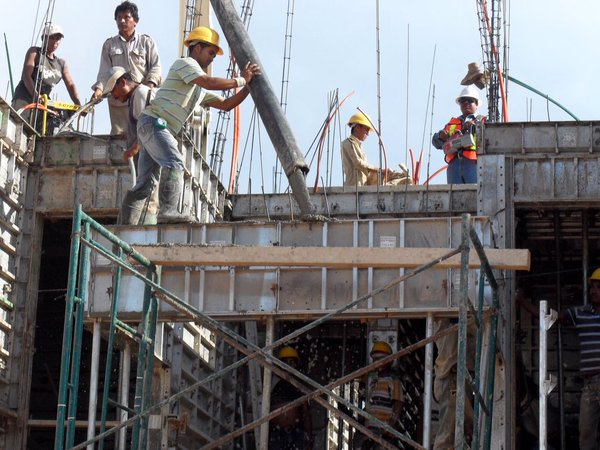 There are basically two types of concrete pumps used for transporting, they are:

A majority of the concrete pumps are of the direct-acting, horizontal piston-type with semi-rotary valves (fig.1). The operation of the direct- acting pump is simple.

The concrete is fed into the pump by gravity and partly by suction created due to the reciprocating motion of the horizontally-acting piston, while the semi-rotary valves open and close alternately. Suction pressure of the order of 0.08 N/mm2 is developed in the pumping cylinder under favourable conditions. 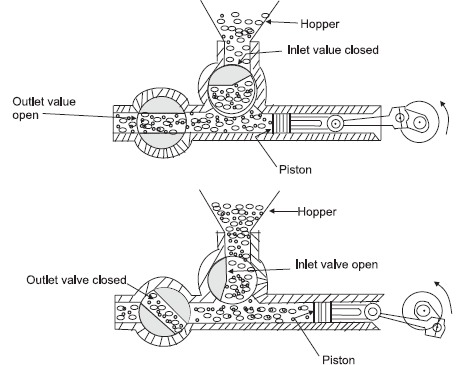 Best suction conditions are obtained if the diameter of the suction pipe is the same as that of the pumping cylinder so that the concrete can flow unhindered. Concrete should be able to flow freely through the full cross section of the suction pipe and possible blockages due to over-sized aggregates should be avoided.

The concrete moves in a series of impulses, the delivery pipe always remaining full. Outputs of up to 60 m3/h can be achieved in modern pumps through 220-mm diameter delivery pipes.

Squeeze type pumps are smaller portable peristaltic type pumps. The concrete from the collecting hopper is fed by rotating blades into a flexible pipe connected to the pumping chamber, which is under a vacuum of about 0.08 N/mm2.

The vacuum ensures that, except when being squeezed by the rotating rollers, the pipe shape remains cylindrical and thus permits a continuous flow of concrete.

The two rotating rollers mounted on planetary drives progressively squeeze the flexible pipe and thus push the concrete into the delivery pipe. Outputs of up to 20 m3/h can be obtained with squeeze pumps using 75-mm diameter pipelines.

Concrete pumps are selected based on two primary parameters, the maximum desired volumetric output of concrete per hour and the peak pumping pressure, p. A nominal output of 30 m3/h is considered sufficient for routine concreting operations related to most civil engineering applications.

For specialized jobs where greater output is desired, pumps with a capacity in excess of 120m3/h have been known to be deployed. The required power of the drive unit (prime mover) of the concrete pump depends on the desired delivery output of concrete, Q, and the pumping pressure, p.

The delivery output and the pumping pressure are correlated by the expression for the hydraulic output, H, of the concrete pump:

Properties of Hardened Self Compacting Concrete

ADMIN
Gopal Mishra is a Civil Engineer from NIT Calicut and has more than 10 years of experience in Civil Engineering and Construction. He is the founder of The Constructor.
Previous article What is Lintel? Types of Lintel and Uses in Building
Next article Methods of Approximate Construction Cost Estimate Preparation 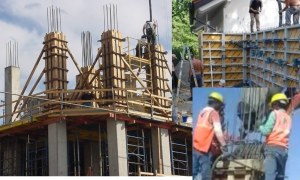