The selection of the appropriate type and size of construction equipments often affects the required amount of time and effort and thus the job-site productivity of a project.

It is therefore important for site managers and construction planners to be familiar with the characteristics of the major types of equipment most commonly used in construction.

One family of construction machines used for excavation is broadly classified as a crane-shovel as indicated by the variety of machines in Figure 1. The crane-shovel consists of three major components:

The type of mounting for all machines in Figure 1 is referred to as crawler mounting, which is particularly suitable for crawling over relatively rugged surfaces at a job site. Other types of mounting include truck mounting and wheel mounting which provide greater mobility between job sites, but require better surfaces for their operation.

The revolving deck includes a cab to house the person operating the mounting and/or the revolving deck. The types of front end attachments in Figure 2 might include a crane with hook, clamshell, dragline, backhoe, shovel and piledriver. 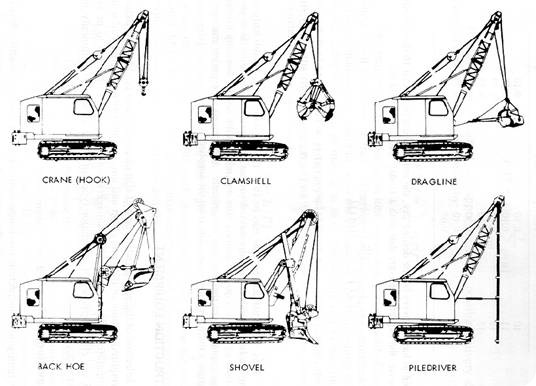 A tractor consists of a crawler mounting and a non-revolving cab. When an earth moving blade is attached to the front end of a tractor, the assembly is called a bulldozer. When a bucket is attached to its front end, the assembly is known as a loader or bucket loader. There are different types of loaders designed to handle most efficiently materials of different weights and moisture contents.

Scrapers are multiple-units of tractor-truck and blade-bucket assemblies with various combinations to facilitate the loading and hauling of earthwork. Major types of scrapers include single engine two-axle or three axle scrapers, twin-engine all-wheel-drive scrapers, elevating scrapers, and push-pull scrapers. Each type has different characteristics of rolling resistance, maneuverability stability, and speed in operation.

Construction Equipments for Compaction and Grading

The function of compaction equipment is to produce higher density in soil mechanically. The basic forces used in compaction are static weight, kneading, impact and vibration. The degree of compaction that may be achieved depends on the properties of soil, its moisture content, the thickness of the soil layer for compaction and the method of compaction.

Some major types of compaction equipment are shown in Figure 2, which includes rollers with different operating characteristics.

The function of grading equipment is to bring the earthwork to the desired shape and elevation. Major types of grading equipment include motor graders and grade trimmers. The former is an all-purpose machine for grading and surface finishing, while the latter is used for heavy construction because of its higher operating speed. 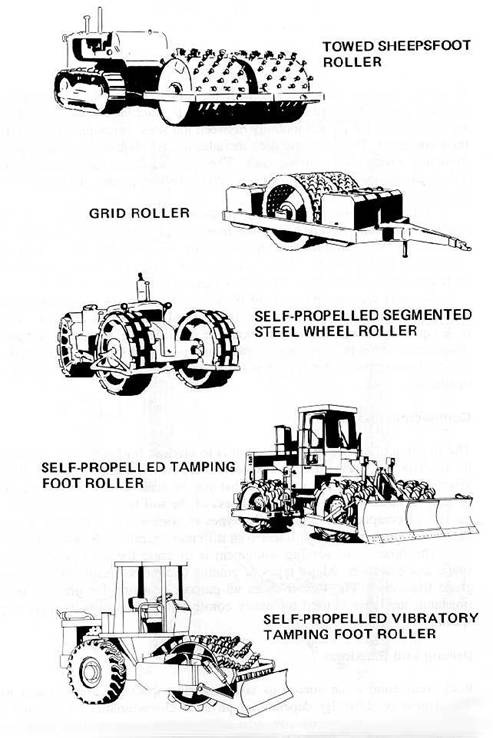 Construction Equipments for Drilling and Blasting

Rock excavation is an audacious task requiring special equipment and methods. The degree of difficulty depends on physical characteristics of the rock type to be excavated, such as grain size, planes of weakness, weathering, brittleness and hardness.

The task of rock excavation includes loosening, loading, hauling and compacting. The loosening operation is specialized for rock excavation and is performed by drilling, blasting or ripping.

Common types of percussion drills include a jackhammer which is hand-held and others which are mounted on a fixed frame or on a wagon or crawl for mobility. A rotary drill cuts by turning a bit against the rock surface. A rotary-percussion drill combines the two cutting movements to provide a faster penetration in rock.

Blasting requires the use of explosives, the most common of which is dynamite. Generally, electric blasting caps are connected in a circuit with insulated wires. Power sources may be power lines or blasting machines designed for firing electric cap circuits.

Tractor-mounted rippers are capable of penetrating and prying loose most rock types. The blade or ripper is connected to an adjustable shank which controls the angle at the tip of the blade as it is raised or lowered. Automated ripper control may be installed to control ripping depth and tip angle.

In rock tunneling, special tunnel machines equipped with multiple cutter heads and capable of excavating full diameter of the tunnel are now available. Their use has increasingly replaced the traditional methods of drilling and blasting.

Construction Equipments for Lifting and Erecting

Derricks are commonly used to lift equipment of materials in industrial or building construction. A derrick consists of a vertical mast and an inclined boom sprouting from the foot of the mast. The mast is held in position by guys or stiff legs connected to a base while a topping lift links the top of the mast and the top of the inclined boom.

A hook in the road line hanging from the top of the inclined boom is used to lift loads. Guy derricks may easily be moved from one floor to the next in a building under construction while stiff leg derricks may be mounted on tracks for movement within a work area.

Construction Equipments for Mixing and Paving

Basic types of equipment for paving include machines for dispensing concrete and bituminous materials for pavement surfaces. Concrete mixers may also be used to mix Portland cement, sand, gravel and water in batches for other types of construction other than paving.

A truck mixer refers to a concrete mixer mounted on a truck which can transport ready mixed concrete from a central batch plant to construction sites. A paving mixer is a self-propelled concrete mixer equipped with a boom and a bucket to place concrete at any desired point within a roadway. It can be used as a stationary mixer or used to supply slipform pavers that can spread, consolidating and finishing a concrete slab without the use of forms.

A bituminous distributor is a truck-mounted plant for generating liquid bituminous materials and applying them to road surfaces through a spray bar connected to the end of the truck.

Bituminous materials include both asphalt and tar which have similar properties except that tar is not soluble in petroleum products. While asphalt is most frequently used for road surfacing, tar is used when the pavement is likely to be heavily exposed to petroleum spills.

Construction Tools and Other Equipments

Air compressors and pumps are widely used as the power sources for construction tools and equipment. Common pneumatic construction tools include drills, hammers, grinders, saws, wrenches, staple guns, sandblasting guns, and concrete vibrators. Pumps are used to supply water or to dewater at construction sites and to provide water jets for some types of construction.

As a result, the performance and activity of equipment can be continually monitored and adjusted for improvement. In many cases, automation of at least part of the construction process is possible and desirable.

For example, wrenches that automatically monitor the elongation of bolts and the applied torque can be programmed to achieve the best bolt tightness. On grading projects, laser controlled scrapers can produce desired cuts faster and more precisely than wholly manual methods.

In the mid-1980’s, some Japanese firms were successful in obtaining construction contracts for tunneling in the United States by using new equipment and methods.

For example, the Japanese firm of Ohbayashi won the sewer contract in San Francisco because of its advanced tunneling technology. When a tunnel is dug through soft earth, as in San Francisco, it must be maintained at a few atmospheres of pressure to keep it from caving in.

Workers must spend several hours in a pressure chamber before entering the tunnel and several more in decompression afterwards. They can stay inside for only three or four hours, always at considerable risk from cave-ins and asphyxiation. Ohbayashi used the new Japanese “earth-pressure-balance” method, which eliminates these problems. Whirling blades advance slowly, cutting the tunnel.

The loose earth temporarily remains behind to balance the pressure of the compact earth on all sides. Meanwhile, prefabricated concrete segments are inserted and joined with waterproof seals to line the tunnel. Then the loose earth is conveyed away.

This new tunneling method enabled Ohbayashi to bid $5 million below the engineer’s estimate for a San Francisco sewer. The firm completed the tunnel three months ahead of schedule. In effect, an innovation involving new technology and method led to considerable cost and time savings.

ADMIN
Gopal Mishra is a Civil Engineer from NIT Calicut and has more than 10 years of experience in Civil Engineering and Construction. He is the founder of The Constructor.
Previous article Typical Joint Detailing of Steel Hollow Sections -Types of Joints
Next article Compressive Strength Test on Concrete Core – Calculation and Results 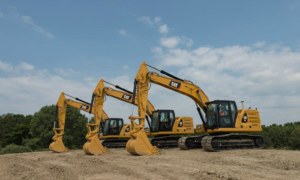 What are the Different Types Of Excavators? [PDF]