Marston-Spangler theory for analysis of loads on sewer sanitary system pipe is established by Marston and it is applicable for most of the loading conditions that may encountered in site.

Not only does this analysis approach based on the theory but also on experiments, and it is considered to be substantially reliable but conservative.

Marston-Spangler theory for analysis of loads on sewer sanitary pipe is explored in this article.

The theory states that the load on the installed sewer sanitary pipe is equal to the weight of soil prism, which is termed as interior prism, on the pipe minus or plus the frictional shearing force transferred to the soil over the pipe by the trench wall side or exterior soil prisms on either side of interior prism.

The direction and magnitude of the frictional force is dependent on the settlement of the prism over the pipe in relation to the neighboring soil prisms.

Assumptions considered in this theory is that, the computed load equal to the load developed when maximum settlement is realized and Rankine theory is used to calculate lateral pressure which generates shearing force between the soil prism over the pipe and adjacent soil prisms.

Finally, the general form of the equation of Marston-Spangler load analysis theory can be seen below:

Even though all factors required for the analysis of all types of sewer sanitary pipe placement conditions are included in the general form of the equation of Marston-Spangler theory, it is more suitable to categorize the placement conditions which may be encountered in the field, derive specific form of equations and generate graphs and tables for each type of installation condition.

Trench condition is the case where the sanitary sewer pipe is placed in nearly narrow width trench excavated in undisturbed soil and covered with backfill materials to the original ground level as shown in Figure-1. 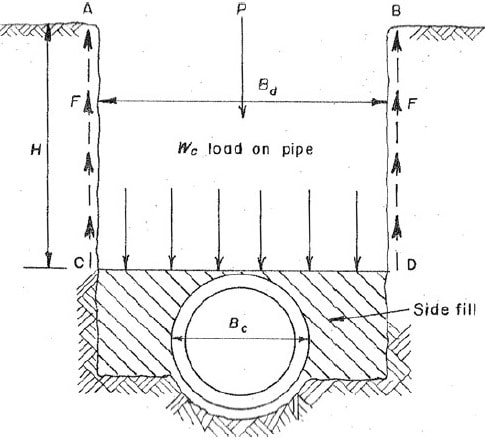 In the trench installation method, the imposed load consists of two components which includes the load of the prism soil directly above the pipe and the shearing forces generated due to relative settlement of soil prism above the pipe and adjacent prisms.

The direction of the shearing force created due to the relative settlement of interior prism in relation to the adjacent undisturbed soil is upward and consequently decrease the load of the prism to a certain degree. As a result, the force imposed on the pipe would be equal to the soil prism load minus shearing force.

The weight of the prism is computed according to the following formula:

Bd: trench width at the top of the pipe

Cd: is computed according to the following equation:

H: height of backfill material above the pipe

: coefficient of internal friction of backfill material and it is always equal or greater than

It should be known that equation-2 provides total load imposed on the sanitary sewer pipe. If the pipe is rigid, then it will support all the load calculate using equation-2.

However, if the pipe is flexible and soil on both sides of the pipe is compacted to an extent that experience deformation under vertical load, that is smaller than the load under which the pipe itself is deformed, then backfill material on either side of the pipe are anticipated to support a portion of the vertical load.

So, the equation used to estimate loads on the pipe would be as follow:

Where the Bc is the outside width of the pipe.

The transition width is the trench width at which the maximum vertical load is realized and the extra increase of trench width would not influence the load.

The load exerted on sanitary sewer pipe in positive projecting embankment condition is equal to the weight of soil prism above the pipe plus or minus the shearing force extended from the sewer pipe side upward into the embankment.

Moreover, Figure-2 illustrates different types of settlements which involves settlement of natural ground adjacent to the pipe (sg), sewer pipe deflection (dc), settlement at the bottom of the pipe (sf), and compression of soil columns (sm) of height (pBc) that affect the load on the positive projecting sewer pipe.

Furthermore, if the sanitary sewer pipe is pile supported in organic soil, it would be necessary to take down drag loads into consideration and the load imposed on the pipe is larger than that of interior prism over the pipe. 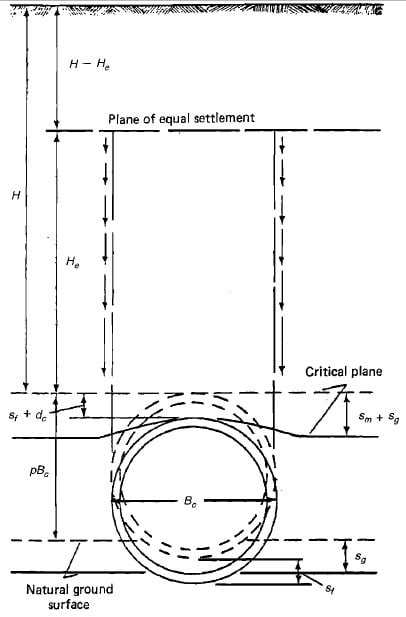 Regarding fill loads which the pipe is subjected to in positive projecting embankment condition, it may be estimated using the following expression:

Bc: outside width of the pipe

Cc: can be estimated using one of the following expressions:

If plane of equal settlement ends at a distance above the pipe, the means H>He as can be observed in Figure-2, then the following formula is used to compute (Cc)

Otherwise, the equation provided below should be applied to estimate (Cc):

To compute (He) in equation-7, the relationship between the deflection of the sewer sanitary pipe and relative settlement between interior soil prism and neighboring soil prisms should be considered. This relationship is called settlement ratio and may be evaluated as follow:

Settlement ration design values have been established and advised to employ. These values can be found in Table-1.

The fill load exerted on the positive projecting pipe is affected by the multiplication of settlement ratio (rsd) times projection ratio (p). The projection ratio is equal to the vertical distance that the sanitary sewer pipe projects above the original ground surface divided by outside vertical height of the pipe (Bc‘).

If the plane of equal settlement is located above the embankment, then the installation is termed as complete trench condition or complete projection condition according to the direction of the shearing force.

However, If the plane of equal settlement is within embankment as shown in Figure-2, then the installation is incomplete trench condition or incomplete projection condition. 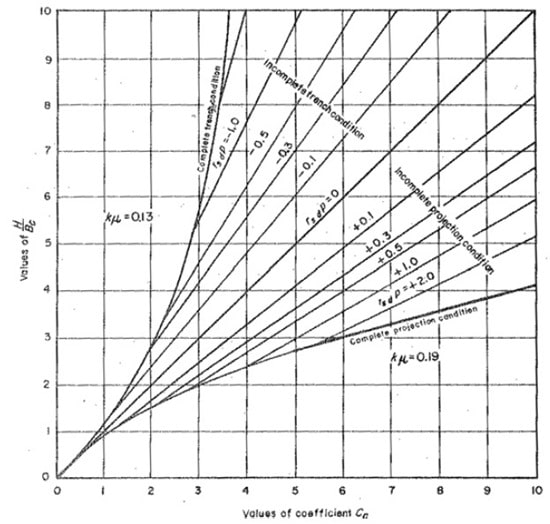 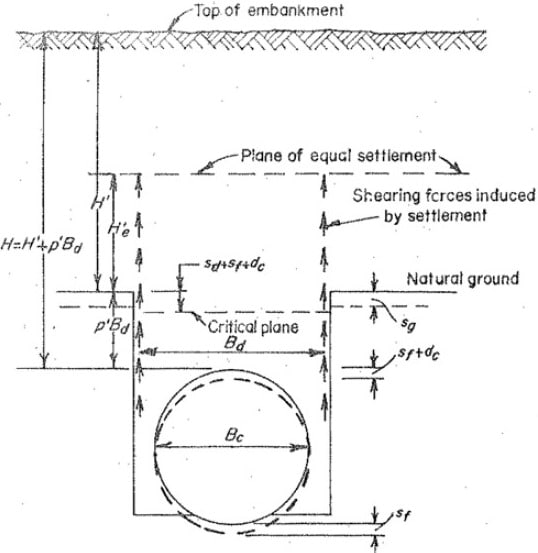 That is why materials such as sawdust and other material with similar property are frequently added to the soil directly above the sanitary sewer pipe to increase interior prism settlement.

The load of fill material on the negative projecting sewer pipe is calculated using the following formula:

When the material inside sub-trench is compacted adequately, then equation-10 would be expressed as follow:

Wc: load on the pipe

Bd‘: average of trench width and outside diameter of the pipe

Cn: can be estimated using one of the following expressions:

If H>He as shown in Figure-4, then the following formula is used to compute (Cn)

Otherwise, the equation provided below should be applied to estimate (Cn):

sd: the compression within the fill for the height of (p’Bd), where p’ negative projection ratio which is equal to the vertical distance from the top of the pipe to the original ground surface at the time of installation divided by trench width.

If the natural ground surface is not levelled, then it is required to consider average vertical distance from the top of sanitary sewer pipe to the both side of the trench

Finally, table-1 provides recommended design values for settlement ratio for negative projecting condition. The value of (Cn) can be estimated for different values (rsd) and projection ratio (p) value of 0.5, 1. 1.5, and 2. Values falling between the provided projection ratio (p) should be found by interpolation. 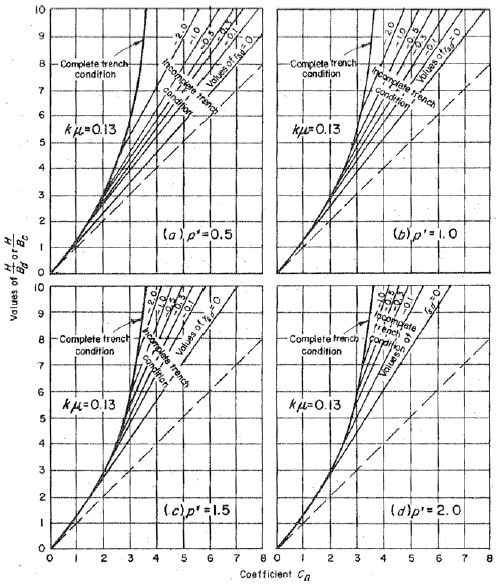 As can be noticed from the Figure-5, induced trench sewer pipe is initially placed as positive projecting sewer pipe. After that, an embankment, which is extended to a certain height above the ground surface is constructed over the pipe and properly compacted.

Then, a trench is dug over the sewer pipe as shown in Figure-5, and filled with compressible material. Finally. The remaining part of the embankment is completed.

The load on induced trench sewer pipe is estimated as follows:

Cn: the same procedure used in the negative projecting condition is employed to estimate this coefficient. 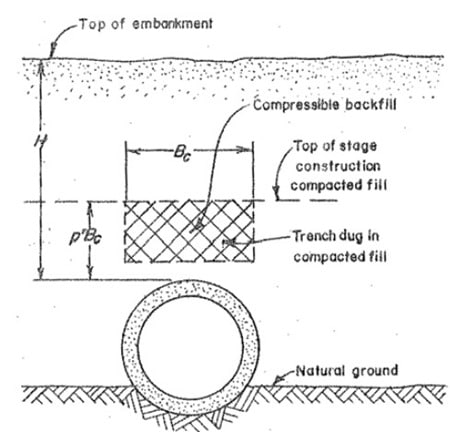 How to Set Up Sewer Sanitary System Layout?

EDITOR
Madeh is a Structural Engineer who works as Assistant Lecturer in Koya University. He is the author, editor and partner at theconstructor.org.
Previous article How to Set Up Sewer Sanitary System Layout?
Next article Principles of Conceptual Design of Earthquake Resistant Structures