Methods of Soil Investigation and Soil Exploration and their Details

Soil investigation and soil explorations are conducted for the purpose of site investigation to get clear information about the soil properties and hydrological conditions at the site.

Site reconnaissance is the inspection of the site and study of topography to get a proper information about the soil and groundwater condition.

The purpose of site exploration is to get detailed information about

Different methods of soil exploration for study of soil profiles are:

A pit, eventually, can be excavated for exploring shallower depths, say of the order of 2 to 5 m, or so. Such a pit can be easily excavated at the proposed construction site, if the soil has a bit of cohesion, and the soil samples can be lifted from such different depths, besides making the easy visualization and examination of the different strata. Even undisturbed soil samples can be lifted from such a pit by a process called chunk sampling.

The process consists of

This is simplest method of boring a hole by hand drilling. These can be used for shallower depths generally confined to depths of about 5 m or so. In cohesive and other soft soils above water table, augers may be used.

This is a simple and fastest method, used for making holes in all types of soils except boulders and rocks.

This method is used to make hole in all types of soils including boulders and rocks.

Soil samples and sampling for Boring Method of Soil Exploration

In disturbed sampling, the natural structures of soils gets partly or fully modified or destroyed, although with suitable precaution the natural water content may be preserved. Disturbed sample can be obtained by direct excavations by auger and thick wall samplers.

In undisturbed sample, the natural structure and properties remain preserved. These samples are used to tests for shear, consolidation and permeability.

It consists of a mixture of soil from different soil strata. Size of the soil grains as well as the mineral constituents, might thus, have changed in such samples. Soil samples obtained from auger cuttings and settling in some well of wash borings, can be classified in this category. Such samples may help in determining the depths at which major changes may be occurring in subsurface soil strata.

This depends on the design of samplers and methods of samplings.

i. Cutting edge: A typical cutting edge of a sampler is shown in the figure 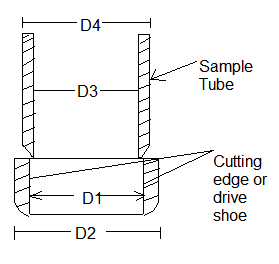 The important design features of the cutting edge are

Where D1 and D2 are internal and external diameters of the cutting edge respectively.

b) Inside clearance: It allows elastic expansion of sample when it enters the tube.

Where D3= inside diameter of the sample tube.

The inside clearance must lie between 1 to 10%, for undisturbed sample it should be between 0.5 and 3%.

c) Outside clearance: It should not be much greater than the inside clearance. Normally it lies between 0 and 2 percent. It helps in reducing the force required to withdraw the tube.

Where D4 is the external diameter of the sample tube.

ii. Inside wall friction: The walls of the sampler should be smooth and kept properly oiled.

These tests are carried out to measure the resistance to penetration of a sampling spoon, a cone or other shaped tools under dynamic or static loading. These tests are used for exploration of erratic solid profiles for finding depth to bedrock or stratum and to get approximate indication of the strength and other properties of soil.

Methods of Subsurface Sounding Tests are:

This test is carried out in a clean hole of diameter about 55 to 150mm. the sides of the holes are supported by casing or drilling mud. A split tube sampler with 50.8mm outer diameter, 38mm inner diameter is driven into the undisturbed soil, placed at the bottom of the hole under the blows of 65kg drive weight with 75cm free fall.

The minimum open length of the sampler is 60cm, the samplers is first driven through 15cm as a seating drive and then through 30 cm or until 100 blows have been applied. Number of blows required to drive sampler 30cm beyond the seating drive is known as penetration resistance and it is denoted by N.

When N is greater than 15, Terzaghi and Peck have recommended the use of an equivalent penetration resistance, Ne in place of the actually observed value of N.

Gibbs and Holtz have studied experimentally the effect of overburden pressure on the value of N and their modification for air dry or moist sand can be represented by the relation,

This type of test is carried out to get a continuous record of the resistance of the soil by penetrating steadily under static pressure, a cone with base of 10 sq.cm (3.6 cm in dia.) and an angle of 60 degree at the vortex.

To find out the cone resistance, the cone alone is first forced down for a distance of 8cm and the maximum value of resistance is recorded. This test is very useful in finding bearing capacity of pits in cohesionless soil. Cone resistance qc (kg/sq.cm) is approximately equal to 10 times the penetration resistance N.

This method is based on the measurement and recording of changes in the mean resistivity or apparent specific resistance of various soils. The test is done by driving four metal spikes to act as electrodes into the ground along a straight line at equal distances. This is shown in the figure.

Where D= distance between the electrodes (cm)

Resistivity mapping: This method is used to find out the horizontal changes in the sub soil, the electrodes kept at a constant spacing, are moved as a group along the line of tests.

Resistivity sounding: This method is used to study the vertical changes; the electrode system is expanded, about a fixed central point by increasing the spacing gradually from an initial small value to a distance roughly equal to the depth of exploration desired.

This method is very fast and reliable in establishing profiles of different strata, provided the deeper layers have increasingly greater density, higher velocities and greater thickness.

Gopal Mishra is a Civil Engineer from NIT Calicut and has more than 10 years of experience in Civil Engineering and Construction. He is the founder of The Constructor.