Close
Ask a Question
Home / Others /Uses of Bentonite in Construction

Bentonite is a type of clay that has an ability to swell and gel when dispersed in water which is used in construction mainly in excavation and foundation works. The word Bentonite is a toponym taken from a place called Fort Benton in USA, where it was discovered as a clay ore.

Importance and Properties of Bentonite

Bentonite is of a great commercial importance possessing innate bleaching properties like fuller’s earth, hence, it is also known as bleaching clay. Containing more than 85% clay mineral, montmorillonite, it is considered to be high plastic clay.

There are basically two types of bentonites, namely:

The commercial importance of bentonite depends more on its physicochemical properties rather than its chemical composition.

Bentonite is valued in foundry sand binding, drilling mud, iron ore pelletisation and as a waterproofing and sealing agent in civil engineering works. In this article, we will talk about the use of Bentonite specifically in construction.

Uses of Bentonite in Construction

The recognition of bentonite as a vital construction element is still in its latent stage, since a hefty percentage of foundations and other civil engineering activities are still carried out without using bentonite and are incurring much higher expenditure through use of cast iron of steel liners. The awareness regarding the use of bentonite in the civil engineering industry has yet to go a long way.

Bentonite finds its use construction mostly in a fluidic (commonly called as bentonite slurry) form because of its rheological characteristics (i.e. their behavior as bentonite slurries when mixed with water). 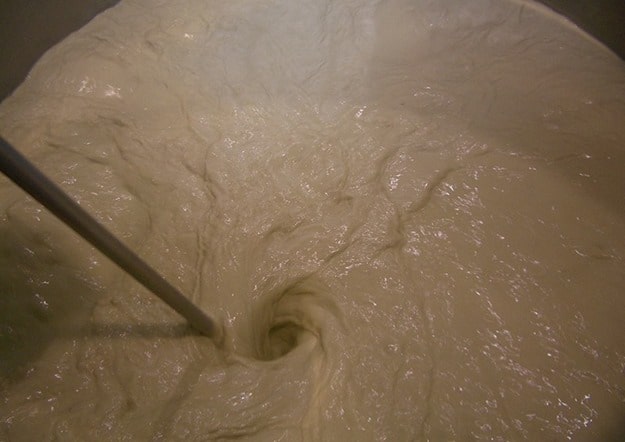 Bentonite slurry is prepared with an objective to achieve maximum hydration of the bentonite, therefore its powder must be added to the mixing water gradually in order to ensure that all the particles are wetted and do not clump into partially hydrated balls.

Potable quality fresh water from a mains supply should be used in the mixing process to achieve the best results. If there is any doubt about the quality of the water, a chemical analysis should be carried out to determine its suitability or the need for chemical treatment before use.

Salt water should not be used in the preparation of bentonite slurry because there is no simple chemical treatment available to remove the sodium chloride.

Bentonite slurry can be prepared either in batches or in a continuous process, depending on the type of equipment used. Typically, the bentonite powder is added through a simple venturi-hopper or directly into a high shear mixer.

The mixing equipment must generate sufficient shear to ensure that all the individual bentonite particles are dispersed in the mixing water. The quantity of bentonite powder to be added to the mixing water depends on the quality of the bentonite and the required viscosity of the slurry. For most applications, concentrations between 4% and 6% by weight are typical.

Functions and Uses of Bentonite Slurry:

Bentonite slurries are known to perform the following pivotal functions:

a) Support the excavation by exerting hydrostatic pressure on its walls i.e. to prevent the collapse or retain an area.

b) Remain in the excavation, and not flow to any great extent into the soil thereby acting as a sealant.

c) Suspend detritus and prevent sludgy layers building up at the base of the excavation.

d) Staying Insular and non-reactive by clean displacement by concrete, with no significant interference with the bond between reinforcement and set concrete.

e) Cleaning to remove suspended detritus, by passing through screens and hydrocyclones, in preparation for re-use.

The primary aim of any bentonite slurry specification must be to ensure that the slurry is capable of fulfilling functions of a retainer, sealant and to stay insular without any deleterious effects on the finished pile, wall or other form of construction.

In addition, for economic and environmental reasons, the maximum re-use and minimum disposal of used slurry are required.

Bentonite slurry can be re-used repeatedly provided its properties are carefully monitored and kept under control. Whatever system of excavation is used, loss of slurry will occur. Some will be excavated with the soil, some will permeate into the strata, and some will become too tainted for re-use and have to be taken off site.

Also, some slurry may be left in the excavation if it is not filled with concrete to ground level. The slurry which is lost is replaced by fresh slurry which is blended with the used slurry to top up the system.

Bentonite powder may have to be added to the slurry or admixtures may have to be introduced to adjust its properties. These may include sodium bicarbonate or soda ash to control the pH, organic thinners or polyphosphates to reduce viscosity, and sodium carboxymethylcellulose (CMC) to reduce fluid loss.

Keeping an eye on the density becomes important when using bentonite slurry as it acts differently at different densities.

The density of slurry, “ps” is related to the concentration, “C” of bentonite by weight of mix water as follows:

If the concentration, “Cs” is expressed as kilograms of bentonite per cubic meter of final slurry, then the formula becomes:

This aforementioned formula is used for calculation of slurry density for mix proportions.

Prospects of Bentonite in Construction

The bentonite industry is expected to perform better in the coming years because of emerging demand for oil clarification and foundation works. The biggest market for bentonite in both North America and European countries are foundry, cat litter, iron ore pelletising and drilling, Civil engineering and environmental applications, such as landfills require bentonite for use as a sealant and lubricant. 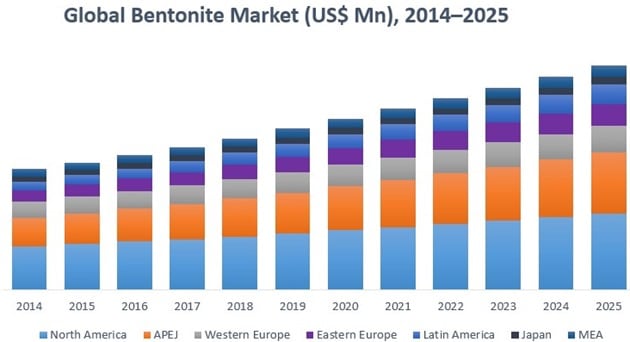 Fig. Depicting Global use of Bentonite in coming years.

Versatility of this material is driving increasing adoption in various industries, including automobiles, construction and chemicals. Technological advancements in bentonite production and increasing demand through exports are major underlying factors anticipated to fuel growth of the Asia Pacific bentonite market between 2016 and 2025.

EDITOR
Akshay is a Civil Engineer who has been engaged in pile foundation projects for the last 5 years. Civil Engineering intrigues him but what intrigues him, even more, is the implementation of hybridized materials in construction projects. He is the author, editor and partner at theconstructor.org.
Previous article TMT Reinforcement Steel Properties and Manufacturing
Next article Methods of Solid Waste Disposal and Management 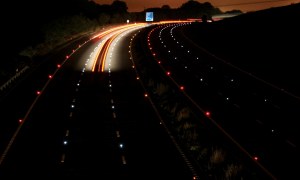 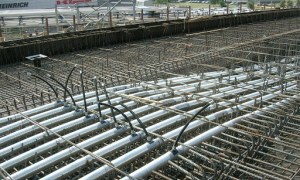