Home / How To Guide /EPOXY COATING OF STEEL REINFORCEMENT

It is important to use epoxy coated rebar to protect steel from corrosion. Using certain types of epoxies yielded positive results, especially in steel exposed to seawater while evaluating the use of epoxy to coat steel reinforcements exposed to chloride attack. 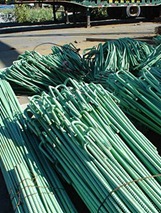 Epoxies have been used in painting reinforced steel for bridges and offshore structures since 1970. Some shortcomings have been found using this method. Precautions must be taken during the manufacturing and operation of painting the steel, such as avoiding the absence of any friction between the bars, which would affect the result of the erosion of the coating layer due to friction. Also, it is difficult to use methods for measuring the corrosion rate such as polarization or half-cell, so it is not easy to predict the steel corrosion performance or measure the corrosion rate.

Painting steel-reinforced bars has been used extensively in the United States and Canada for 25 years. More than 100,000 buildings use coated bars, which is equal to 2 million tons of epoxy-coated bars. The coated steel bar must follow ASTM A 775M/77M-93, which sets allowable limits as the following:

These deficiencies cited by the code are the result of operation, transportation, and storage. There are some precautions that must be taken in these phases to avoid cracks in the paint.

Painting steel reinforcement bars will reduce the bond between the concrete and steel; therefore, it is necessary to increase the development length of steel bars to overcome this reduction in bond strength. According to American Concrete Institute (ACI) code (ACI Committee 318 1988), the increase of the development length is from about 20–50%.

Painting the mild, low tensile steel at full bond strength is prohibited due to friction; when it is painted with coating, all the bond strength will be lost, so it is important to avoid coating the smooth bars. Care must also be taken not to increase the thickness of the paint coating to more than 300 ?m(micrometer). Some researchers have stated that when painting with a thickness of 350 ?m was used for the main steel reinforcement in concrete slab, testing found too many cracks, which led to separation between steel bars and concrete.

Corrosion rates between steel bars without coating and other bars coated by epoxy were compared; both were exposed to tap water and then some samples were placed in water containing sodium chloride and sodium sulfate. Table above shows the rate of corrosion for the coated and uncoated steel bars. From this table, one can find that the corrosion rate is slower for coated than for uncoated steel bars. This method is cheap and is widely used by workers and contractors in North America and the Middle East.

Note that the coating of reinforcement steel by epoxy is not exempt from the use of concrete of high quality while maintaining a reasonably concrete cover. Some steel manufacturers can provide steel bars with the required coating. This is a good alternative to performing coating on-site because the thickness of the coating cannot be controlled as it needs some special tools to measure this thickness.

ADMIN
Gopal Mishra is a Civil Engineer from NIT Calicut and has more than 10 years of experience in Civil Engineering and Construction. He is the founder of The Constructor.
Previous article Types of Cracks in Concrete Beams and their Causes
Next article DEFLECTIONS IN DETERMINATE TRUSSES