Firm and sound working conditions are indispensable when construction of buildings, powerhouse, dams, and other structures has to be executed. These structures not only require a dry base for their foundations but also good water-table stability in the girth.

Dewatering of any excavated area is done in order to keep the excavation bottom dry, to prevent the leakage of water or sand and to avoid upheaval failure. Dewatering could turn out to be a herculean task if one doesn’t adopt the right method.

The different methods available for dewatering of excavations at constructions sites are not necessarily interchangeable as each one has a narrow range of applications, therefore, adopting the right method of dewatering for a particular ground condition is always a critical and a difficult decision to make.

A minor amount of water can always be pumped out by creating a sump but when other factors like continuous seepage, excessive smudge come into play one has to resort to a bit of sophistication.

There are four important dewatering methods one should be aware of: 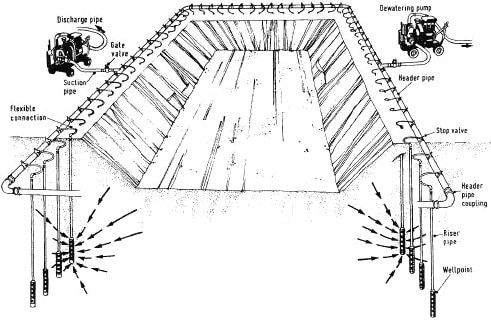 1) A series of wells of required depth are created in the vicinity of the excavated area from where the water has to be pumped out. The wells are arranged either in a line or a rectangular form where the wellpoints are created at a distance of at least 2m from each other.

2) Riser pipes or dewatering pipes are then installed into those closely spaced wells which on the surface are connected to a flexible swing pipe which is ultimately appended to a common header pipe that is responsible for discharging the water away from the site. The purpose of using a flexible swing pipe is just to provide a clear view of what is being pumped and the purpose of header pipe is to create suction as well as discharge the water off the working area.

3) One end of the header pipe is connected to a vacuum pump which draws water through notches in the wellpoint. The water then travels from the wellpoints through the flexible swing pipe into the header pipe to the pump. It is then discharged away from the site or to other processes to remove unwanted properties such as contaminants.

4) The drawdown using this method is restricted to around five to six meters below the wellpoint pump level. If a deeper drawdown is required, multiple stages of wellpoints must be used. 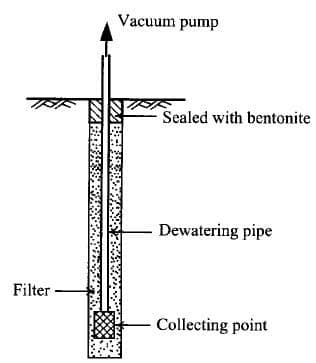 The method is very similar to the wellpoint method of dewatering; the only difference lies in the usage of high-pressure water in the riser units instead of vacuum to draw out water from the wellpoints. The method uses the venturi principle which is the reduction in fluid pressure that results when a high-pressure fluid flows through a constricted section of a pipe. 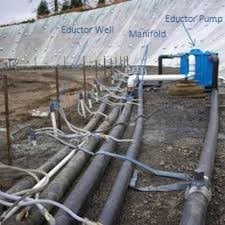 A high-pressure supply main feeds water through a venturi-tube just above the well-screen, creating a reduction in pressure which draws water through the riser pipe. The high pressure main feeds off the return water. The biggest advantage of using the eductor system is, the water table can be lowered from depths of 10-45 m if multiple pumps are operated from a single pump station. This method therefore becomes economically competitive at depth in soils of low permeability.

This is the most common and economical method of dewatering as gravity is the main playing force. Sump is created in the excavated area into which the surrounding water converges and accumulates facilitating easy discharge of water through robust solid handling pumps. 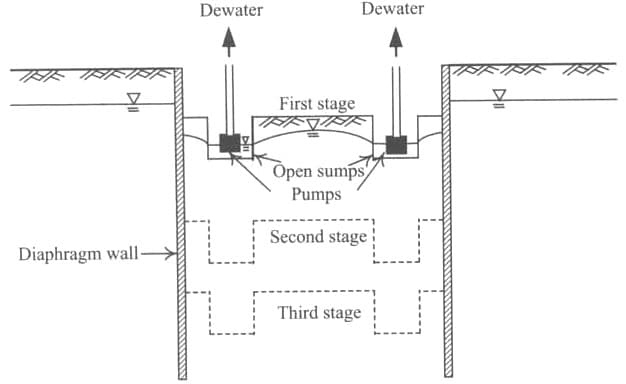 If the excavation area is large, several sumps may be placed along the longer side or simply use a long narrow sump which is called a ditch.

Just like the wellpoint method, wells are drilled around the excavated area, but the diameter of wells, in this case, varies between 150-200mm. By creating deep wells around the vicinity, the groundwater is made to fall into them under the influence of gravity.

As a result, the groundwater level in the surroundings would decline. According to the type and arrangement of pumps, the depths of the wells could reach up to 30m. This method is generally adopted when a heavy amount of water from the ground has to be drawn out. 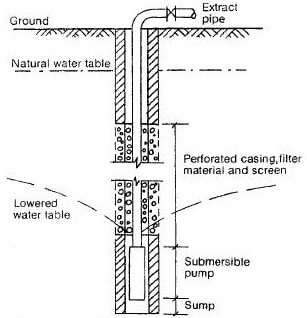 Casings of diameter fitting to wells are installed in order to retain the wells. Additionally, well screens and filters (between sidewalls and casing) are used which serve as a filtering device therefore not letting the unwanted sediments enter into the well. The water thus accumulated is pumped out using a submersible pump or a centrifugal pump.

It is prudent to assess ground-permeability conditions beforehand since the whole process of accumulation and pumping takes quite a bit of time. This may cause settlement in the nearby areas and hence a different technique might need to be adopted.

Sumps and Ditches for Dewatering of Excavations -Uses and Advantages

EDITOR
Akshay is a Civil Engineer who has experience in various Pile foundation projects. Civil Engineering intrigues him but what intrigues him, even more, is the implementation of hybridized materials in construction projects. He is the author, editor, and partner at theconstructor.org.
Previous article Hydrographic Surveying – Methods, Applications and Uses
Next article How to Control Corrosion of Steel Reinforcement in Concrete?