Coupling beam is a lateral force resistant component of a structure. Types, advantages and design of coupling beam as per ACI 318- 11 is discussed.

Coupling beam is used effectively when two shear wall or any other elements that are used for withstanding lateral loads is combined. This consequently decrease overturning effect and improve overall stiffness of a system.

Moreover, if coupled beam proportioned properly above second floor of building, plastic hinges are developed and subjected to similar rotations at the beam end over structure height at the same time.

This lead to distribute input energy dissipation over the height of the structure in the coupling beams instead of concentration mostly in the wall piers of the first story.

Therefore, the main function of coupling beam is dissipation of energy and improving stiffness and strength of the lateral load system of the structure.

Favorite coupling beam performance is obtained when it is designed to be adequately strong and stiff. Additionally, coupling beams should yield before wall piers, exhibit ductile behavior, and possess considerable energy absorption characteristics.

Figure-1 shows coupling beam in structure a, b, and c.

Coupling beam should be designed in such a way that over coupling and under coupling is prevented or avoided, because the former would make the system to behave as a single solid wall with small frame action and the latter will cause the system to act like two separated walls.

There are two types of coupling beams used in structure:

This type of coupling beam is similar to normal reinforced concrete with bottom and top reinforcement in addition to shear stirrups. It is employed when the beam is quite long compared with its depth. 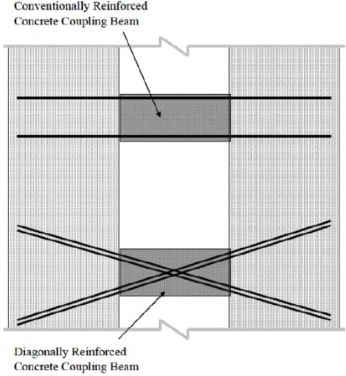 When the ratio of coupling beam length is similar to its depth, the design of the beam is governed by shear and the failure is brittle. Diagonal reinforcement is provided to avoid brittle failure and resist shear.

This reinforcement arrangement leads to decrease the amount of shear reinforcement. An example of diagonal coupling beam is illustrated in Figure-3. 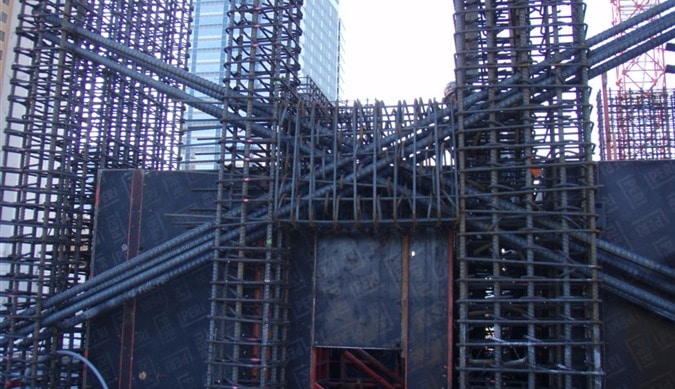 For design purposes, American Concrete Institute (ACI 318- 11) classified reinforced concrete coupling beams into three categories depending on the ratio of coupling beam clear span to its depth (ln/h) and on the level of shear stress in the coupling beams.

All three coupling beam types are explained in the following points:

There is no enough room for installing diagonal reinforcement that is why horizontal steel bars are placed at the top and bottom of the beam.

This beam need to be reinforced with two intersecting groups of diagonally installed steels symmetrical about midspan, unless it can be demonstrated that loss of stiffness and strength of the coupling beams will not decrease the vertical load carrying ability of the structure, the integrity of nonstructural components and their connections to the structure, or post seismic egress from the structure.

Other coupling beams are those beams that are not included in the previous two categories and can be reinforced with either conventional reinforced moment frame beams or with two intersecting groups of diagonally placed steels.

Figure-4 illustrate coupling beam space design. Heavy hatched area specifies upper limit on shear design of the beams. Beams that are locating in the lightly shaded area may be designed as per ACI code but could have constructability problems due to reinforcement congestion.

Moreover, beams falling into left side of dashed line are designed with diagonally reinforced bars.

However, those to the right are adequately designed with special moment frame beam. Furthermore, beams with extremely small (ln/h) ratio can be designed using strut and tie model that is provided by ACI Code appendix A. 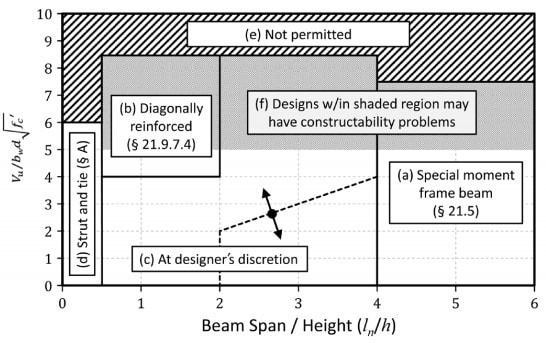 Finally, detailed design procedure of coupling beams is not provided in this article. However, it can be found in Seismic Design of Cast-in-Place Concrete, Special Structural Walls and Coupling Beams, A Guide for Practicing Engineers which is a report prepared for US department of commerce.

EDITOR
Madeh is a Structural Engineer who works as Assistant Lecturer in Koya University. He is the author, editor and partner at theconstructor.org.
Previous article Sulphate Attack on Concrete – Process and Control of Sulphate Attack
Next article Masonry Pilaster Wall Design and Construction Details