Design of Curtain Walls for Wind Loads -Details and Calculations

Curtain walls are the first structural element that subjected to wind loads. There are cases in which wind loads controls the structural design of curtain walls that may include bluff body aerodynamics analysis, use applicable codes, determination of material geometry and composition cautiously, and consideration of production and placement restriction.

The member of structure that greatly influence the design of curtain wall is the floor slabs which provide proper location for the anchorage of curtain walls system.

So, curtain walls are arranged like vertical members that attached to the floors slabs and spanning from floor to floor continuously.

In this article, the design of curtain walls for wind loads are discussed and explained.

Fig.1: Wind Direction on a Building 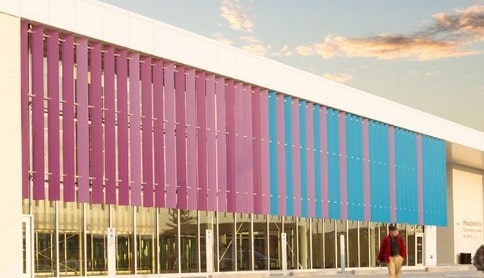 Fig.2: Curtain Walls on a Building

Following are the points which are discussed for design of curtain walls for wind loads:

Frequently, framing members are configured in an orthogonal manner of beam and column mullions which stretched from floor to floor and transfer the wind load to the building structure as it can be seen from Figure-3 and Figure-4.

The horizontal elements between vertical mullions are considered as secondary members that transfer a part of dead and wind loads to the vertical elements.

Lastly, if openings such as large mechanical ventilation or operable doors and windows are present, then the load transfer path could vary and interior pressure, which may or may not be in harmony with external pressure, is possible to be generated, so taking this possibility into consideration during curtain wall design is a must. 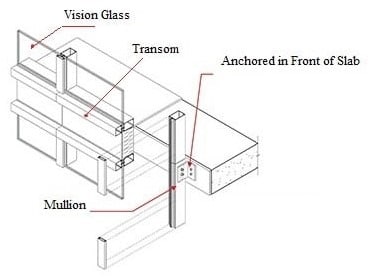 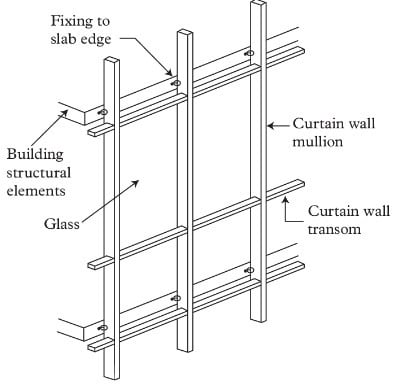 As far as the controlling influence of loads is concerned, wind loads are commonly the controlling effect, but there are situations in which blast or debris impacts are needed to be considered.

Performance specification of curtain wall glass that may include deflection limitations and other factors that could affect the glass design, are established by architects.

It is required to take resident comfortability, interference with adjacent materials, and possible accumulated movements into account while the value of deflection at the center of the glass is specified.

Regarding boundary condition of glass panels which is employed in the structural analysis, simply supported edges would be assumed for ordinary connections for example dry gasket pocket glazing and silicone glazing.

Moreover, lateral pressure on glass panels are considered to be evenly distributed over the whole panel surface.

Finally, it is reported that the most widely used glass thickness in the united states for high performance commercial projects is 0.635cm. added to that, 2.54cm insulated glass unit is composed of 0.635cm outer lite glass plus 1.27cm void plus 0.635cm inner lite glass.

ASTM E1300 provide detail procedure regarding the sizing of glass after both geometry and design loads are obtained. 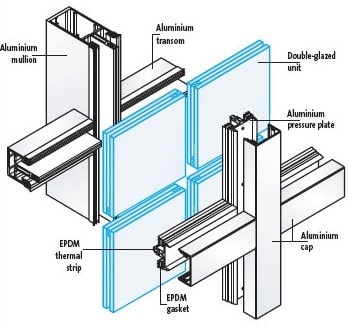 There is no mechanical restrain around the edge of glass unit to achieve proper integrity, so experience of structural engineer should be combined with hyper elastic rubber theory to obtain required integrity.

Several means have been developed to restrain glass panels since this technique has been developed for example small rectangular clamps, which are termed as patch fittings, applied initially.

After that, T-headed bolts, which are inserted into a complete drilled hole in the glass, used to keep glass panels at their position.

Then, countersunk holes are made into the glass in order to prevent the appearance of metal fixture on the outside surface. It should be remembered that, dimensions needed for countersunk hole influences the determination of glass panel thickness.

Different types of structural frames are possible to be employed for point support collection for example spider fittings on space frames, cable networks, and tension framing can be applied rather than orthogonal grid of aluminum framing. 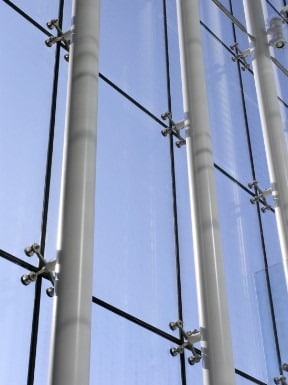 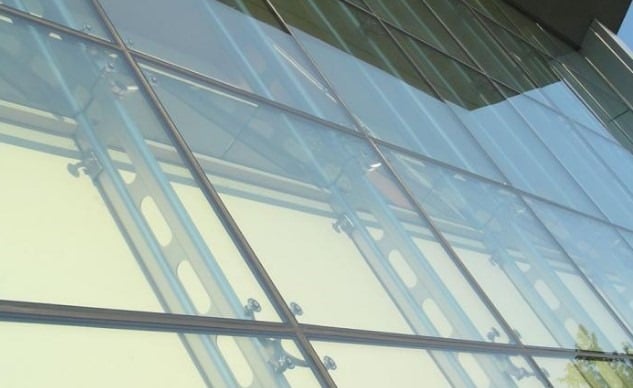 It should be bore in mind that glass might fail suddenly and destructively, so it is required to carry out accurate evaluation to obtain structural integrity.

Lastly, proper stability may be achieved through the provision of large safety factors, sacrificial plies, and extra or alternative load path.

Unlike steel and concrete construction where frequently dimensional measurement values are rounded off to the nearest millimeter, different components of curtain walls are required to be dimensioned and sized substantially accurate since not only do curtain wall contractors want to minimize the utilization of expensive materials but also the intricate fit of detail assemblies needs extreme accuracies to 2mm to a hundred millimeter.

It should be known that, deflection plays crucial role in the design of curtain wall. Added to that the deflection of spandrel beams at the perimeter of the building due to live loads would affect curtain wall expansion joints.

Generally, the desire of designer is to design a curtain wall that withstand wind loads efficiently. However, the design expectations of producers and erectors are the decrease of expensive material utilization and easily installed curtain wall components at construction site, respectively. So, it is required to consider the demands of both manufactures and installers during the design in order to create a successful product at the end.

In order to achieve the above objective, it is necessary for the designer to make satisfactory decision during the design so as to meet demands of all parties involved in the curtain wall construction.

It should be known that, good decisions cannot be made unless adequate information regarding fabrication methods and equipment capabilities are available in addition to understanding construction tolerances, erection rigging, and glazier’s skill level.

The design wind load can be found according to ASCE 7-10 (minimum design loads for buildings and other structures). Wind load computation procedures are divided into two sections namely: wind loads for main wind force resisting systems and wind loads on components and cladding.

There are four different calculation procedures to compute the former whereas two methods namely Analytical Procedures and Wind Tunnel Procedure are employed to calculate wind loads on components and cladding.

Wind load combinations are also provided in ASCE 7-10, and in the majority of cases the following wind combination provided below is applied because it creates the most critical situations:

There are several conditions in which the safety of glazing should be explored, and there are cases in which the design for safety glazing would surpass the design of curtain wall for wind loads. generally, necessary safety measures and techniques are provided in applicable codes.

Glass in fire rated assemblies, overhead glazing, glass in doors and operable windows, and Glass adjacent to pedestrian walking surfaces are examples of conditions in which safety glazing need to be considered.

Visualizing three-dimensional curtain wall when it is subjected to wind loads and anticipate load distribution and the response of curtain wall to the influences of the wind is a crucial key to a well performed curtain wall design.

It is required to have necessary expertise and experience in order to create a model that simulate the behavior of curtain wall.

Moreover, there are some essential data that should be achieved otherwise analytical models cannot be generate, for example loads and geometrical parameters and mechanical properties of materials.

Curtain wall analytical models and detailing will be explained in the following sections:

Bernoulli’s equation is used to change dynamic wind pressure to equivalent static pressure and this pressure is exerted on the surface of glazing perpendicularly. Primary and secondary framing elements are analyzed applying a local uniformly distributed lateral loads and triangular load patterns respectively.

It is considered to be the most suitable method to represent curtain wall structural behavior. Commonly, vertical mullions (primary frame members) are analyzed like continuous beams spanning from floor to floor with uniformly distributed load. When greater accuracy is required, each primary frame space or bay would be analyzed utilizing trapezoidal or triangular load patterns.

Horizontal beams (secondary frame members) are analyzed as simply supported beams with trapezoidal or triangular loads pattern. Both vertical and horizontal framing elements along with their free body diagrams are illustrated in Figure-9. 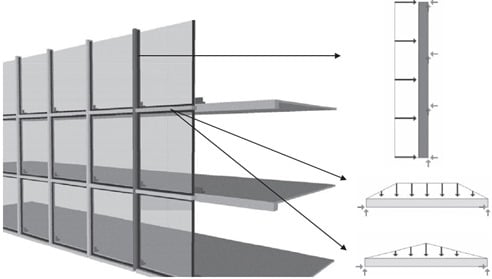 Modeling of boundary conditions are commonly the most adventurous task since perimeters frequently contain flexible supports and gaskets. Additionally, it should be bore in mind that suitable constant physical properties be used for materials such as glass or aluminum.

Nonetheless, connection assembly models should be created to represent the transfer of loads one member to another one.

Mechanical connections that make use of weld or fastener are modeled as rigid bodies with geometry of shifted loads to specify torsion and overturning actions.

There are various anchors and embeds that designer need to familiar with in order to select the best type of anchor for the present condition. Examples of anchors are welded steel, bolts, and slotted channels.

The slotted channels are widely employed in high performance curtain wall systems. Broad range of post-installed anchors are specified so as to offer flexibility for missing embeds or tolerances.

Communication between structural engineer and curtain wall designer is needed so as to specify anchor design assumption and determine the effect of loads and moments imposed on structure by curtain walls.

Finally, it is required to make rooms for structural movement at anchor-wall interface. 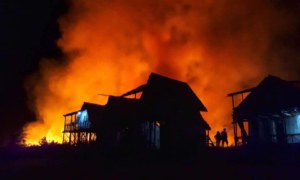 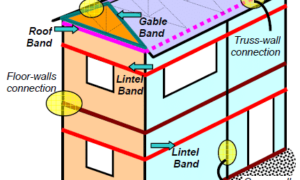