Slabs are generally designed on the assumption that they consists of a number of beams of breadth ‘one meter’. 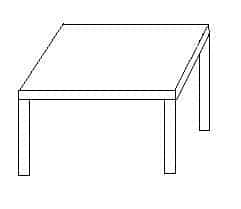 The effective span of a simply supported slab shall be taken as the lesser of the following:

The following table gives the maximum values of the ratio of span to depth.

The diameter of main bars may be from 8 mm to 14 mm. for distribution bars, steel 6 mm or 8 mm are generally used.

The minimum cover to outside of main bars shall not be less than the following:

Steps to be followed in the design of slab

The maximum bending moment per meter width of slab,

Where, w = total load intensity per square meter of the slab.

Find the effective depth ‘d’ from the above equation.

Suppose a slab is supported at the ends and also at intermediate points on beams, the maximum sagging and hogging moments to which the slab is subjected to due to uniformly distributed load, can be computed as follows:

ADMIN
Gopal Mishra is a Civil Engineer from NIT Calicut and has more than 10 years of experience in Civil Engineering and Construction. He is the founder of The Constructor.
Previous article Chloride Attack on Concrete Structures – Cause and Prevention
Next article DETAILING OF RCC BEAMS