What is Shear Wall? – Its Types and Location in Buildings

Home / Structural Engineering /What is Shear Wall? – Its Types and Location in Buildings

What is a Shear Wall?

Shear wall is a structural member in a reinforced concrete framed structure to resist lateral forces such as wind forces. Shear walls are generally used in high-rise buildings subject to lateral wind and seismic forces.

In reinforced concrete framed structures the effects of wind forces increase in significance as the structure increases in height. Codes of practice impose limits on horizontal movement or sway. 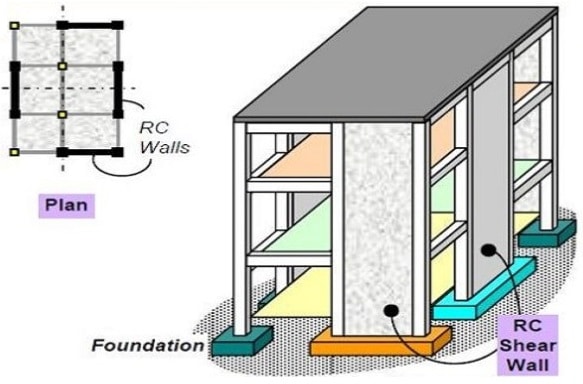 Limits must be imposed on lateral deflection to prevent:

Generally, the relative lateral deflection in any one storey should not exceed the storey height divided by 500.

The figure below shows the deflected profiles for a shear wall and a rigid frame.

One way to limit the sway of buildings and provide stability is to increase the section sizes of the members to create a rigid, moment-resisting frame.

However, this method increases storey heights, thus increasing the building cost. It is rarely used for more than 7 or 8 storeys.

Another way is to provide stiff, shear resisting walls linked to a flexible frame. These can be external walls or internal walls around lift shafts and stairwells (a core) or sometimes both are provided. 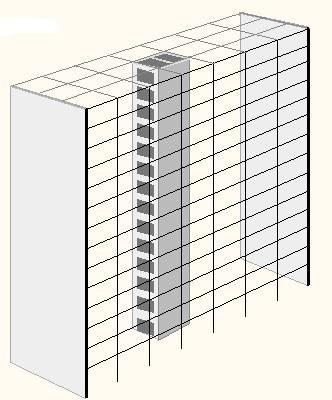 Monolithic shear walls are classified as short, squat or cantilever according to their height to depth ratio. 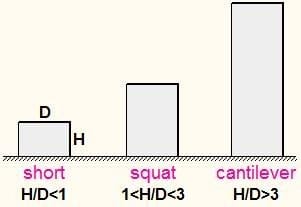 Generally shear walls are either plane or flanged in section, while core walls consists of channel sections.

In many cases, the wall is pierced by openings. These are called coupled shear walls because they behave as individual continuous wall sections coupled by the connecting beams or slabs. 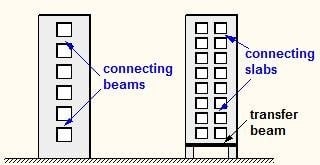 Normally the walls are connected directly to the foundations. However, in a few cases where the lateral loads are relatively small and there no appreciable dynamic effects, then they can be supported on columns connected by a transfer beam to provide clear space.

Location of Shear Walls in a Building

The shape and plan position of the shear wall influences the behavior of the structure considerably. Structurally, the best position for the shear walls is in the centre of each half of the building. This is rarely practical, however, since it dictates the utilization of the space, so they are positioned at the ends.

This shape and position of the walls give good flexural stiffness in the short direction, but relies on the stiffness of the frame in the other direction.

However, this arrangement lacks the good torsional stiffness of the previous arrangements due to the eccentricity of the core.

If the core remains in this position then it must be designed explicitly for the torsion. It is far preferable to adopt a symmetrical arrangement to avoid this.

How to Prevent Errors During Setting Out Building Plan on Ground?

Types of Precast Components in a Building

ADMIN
Gopal Mishra is a Civil Engineer from NIT Calicut and has more than 10 years of experience in Civil Engineering and Construction. He is the founder of The Constructor.
Previous article Types of Building Repair and Maintenance Services
Next article Concreting of Pile Foundations – Workability and Quality of Concrete for Piles