There are various surveying instruments for measurement of angles and elevations. Types, properties, uses and details of these surveying equipment is discussed.

Among the variety of instruments that are available to measure angles and elevations, it is important to choose the best one that is more suitable for the specific job.

The best source of information for a specific instrument is the reference of owner’s manual or the product catalog that is provided by the manufacturer.

Equipment Used for Measuring Angles and Elevations in Surveying

The common equipment used for measuring angles and elevations in surveying are:

Hand Levels for Measurement of Elevation and Slope in Surveying

As the name tells, these are levels that are held in the hands of the operator. Hand levels are the simplest level among the surveying instruments. The hand level employs a spirit level and a single cross-hair.

The main purpose of hand level is to ensure that the chains are in level when the horizontal distance is measured with the help of plumb bobs. It is also used for the same purpose for slope estimation and change in elevation.

The common magnification of hand level is from zero to 5x. Hand levels with more sophisticated mechanism will have stadia hairs to measure the horizontal distance. 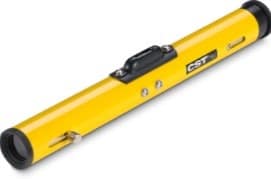 Fig.1: A hand Level in Surveying

Now the point where the line of sight strikes the ground is marked. With the help of the distance to this point and the height of user’s eye from the ground, the slope is determined.

The eye height of the user is the rise.

The distance from the observation point to where the line of sight strikes the ground is the run.

Abney Level for Measurement of Angles and Slope in Surveying

Hand levels with more sophistication will form Abney levels. This comprise of a direct reading scale for vertical angles and slope, stadia hairs and better optics and magnification.

Compared to hand level, the precision of slope calculation is better. The measuring distance of the stadia of the Abney level has a precision of 1/10 of a foot. The distance measured using stadia is horizontal.

Most of the Abney levels have provision for adjustment for both focusing as well as magnification. For preliminary surveying, they give appreciable accuracy if a rod and target are employed. 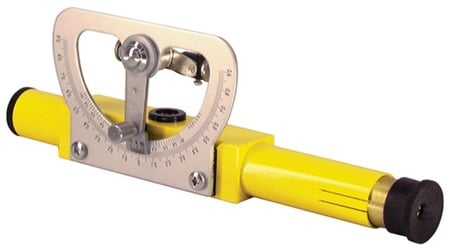 Using a stick or rod of known height with the hand level and the Abney level helps to improve the accuracy of measurement. The use of stick also helps in keeping the level steady.

Dumpy Level for Measurement of Angles and Elevation in Surveying

The dumpy level is the simplest form of the level that is supported by a tripod. The accuracy of the instrument is increased by the use of a tripod. The tripod also helps in providing a reference for the horizontal angles.

A dumpy level comprises a telescope and a spirit level that is mounted parallel to the line of sight of the telescope.

The telescope in the dumpy level will have at least one horizontal cross hair that is mounted in line with the line of sight. It also has a vertical cross hair and two stadia cross hairs. 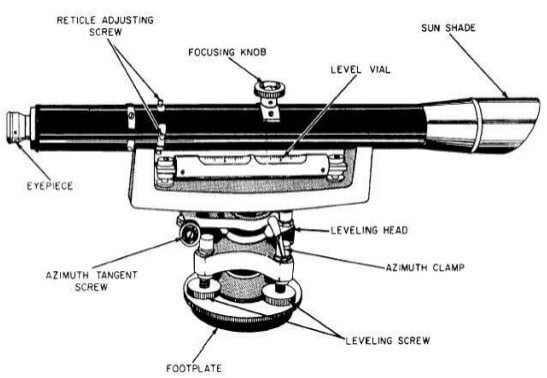 A mechanism called the leveling plate rotates in 360 degrees. This is the platforms onto which the telescope and the spirit level are mounted. The whole mechanism is placed on a plate that is attached to a tripod. This is later leveled to start the surveying.

Automatic Level for Measurement of Angles and Elevation 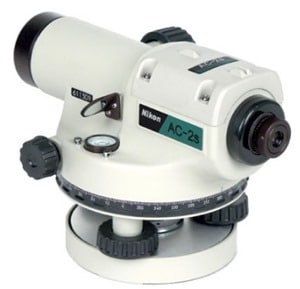 A variety of models is available for automatic levels. Some are more accurate and more precise when compared to the dumpy levels. These are less accurate compared with transits and the total stations.

Laser Level for Measurement of Angles and Elevation

The laser level is a measuring level that makes use of a beam of laser light to establish the line of sight i.e. the reference line. The different types that come under this category are: 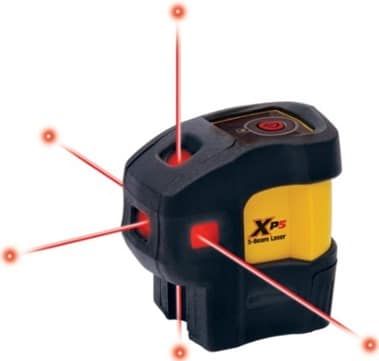 The distinct advantage of laser levels is they can be operated by a single person. The laser level is mounted on a tripod and later leveled. Once the system is turned on, it does not need any supervision further. After which the surveyor can record the rod readings by walking around the area anywhere within the range of the beam.

This system also has the advantage of multiple detectors which can be used with a single laser. This will thus enable to record data simultaneously by more than one person.

Transit Level for Measurement of Angles and Elevation 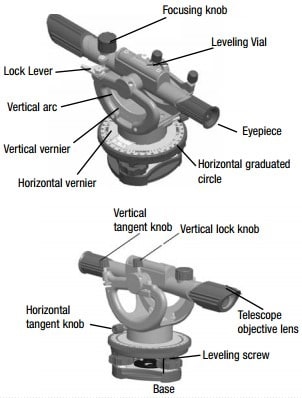 Theodolite for Measurement of Angles in Surveying

A theodolite is a precision instrument that is used to measure the angle in the horizontal and vertical planes. Theodolite is most commonly used in surveying. But they are also used in the areas of metrology and rocket launch technology.

A modern developed theodolite consists of a movable telescope that is mounted within two perpendicular axes called the horizontal or the trunnion axis and the vertical axis. Pointing the telescope on a target object will enable measurement of angle with great precision. 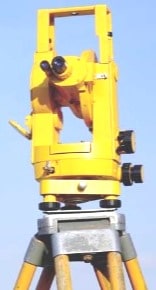 The theodolite must be placed vertically above the point to be measured with the help of a plumb bob or an optical plummet or any laser plummet. After this, the level is set for the instrument using the leveling foot screws and tubular spirit bubbles.

EDITOR
Neenu is a Civil and Structural Engineer and has experience in Design of Concrete and Steel Structures. She is an Author, Editor and Partner at theconstructor.org.
Previous article Properties of Epoxy Resins for Repair and Rehabilitation of Structures
Next article Weep Holes in Retaining Walls -Types, Functions and When it is Required 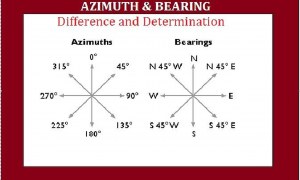 Azimuths and Bearings in Surveying-Difference & Determination 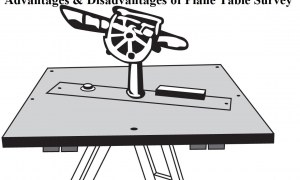