There are two types of rain gauges, non-recording type and recording type. Rain gauge is a type of instrument used by meteorologists and hydrologists to measure rainfall rate in a certain period of time. Rain gauges are also known as udometer, pluviometer and ombrometer.

Non-recording type rain gauge is most common type of rain gauge used by meteorological department. It consists of a cylindrical vessel 127mm in diameter with a base enlarged to 210mm diameter.

At its top section, funnel is provided with circular brass rim which is 127mm exactly so that it can fit into vessel well. This funnel shank is inserted in the neck of a receiving bottle which is 75 to 100mm high from the base section and thinner than the cylinder, placed into it to receive rainfall. 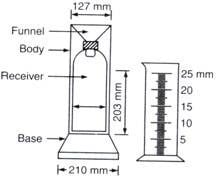 A Receiving bottle has capacity of 100mm and during heavy rainfall, amount of rain is frequently exceeded, so the reading should be measured 3 to 4 times in a day. Water contained in this receiving bottle is measured by a graduated measuring glass with an accuracy up to 0. 1mm. For uniformity the rainfall is measured every day at 8:30Am IST and is recorded as rainfall of the day.

Proper care, maintenance and inspection of rain gauge especially during dry weather is necessary to keep the instrument free form dust and dirt, so that the readings are accurate.

There are three types of recording rain gauges

Weighing bucket type rain gauge is most common self-recording rain gauge. It consists of a receiver bucket supported by a spring or lever balance or some other weighing mechanism. The movement of bucket due to its increasing weight is transmitted to a pen which traces record or some marking on a clock driven chart.

Weighing bucket type rain gauge instrument gives a plot of the accumulated (increased) rainfall values against the elapsed time and the curve so formed is called the mass curve. 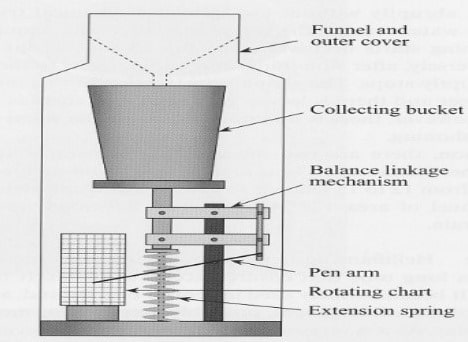 Tipping bucket type rain gauge is a 30cm sized circular rain gauge adopted for use by US weather bureau. It has 30cm diameter sharp edged receiver and at the end of the receiver is provided a funnel.

Pair of buckets are pivoted under this funnel in such a manner that when one bucket receives 0.25mm of precipitation (rainfall),it tips discharging its rainfall into the container, bringing the other bucket under the funnel. 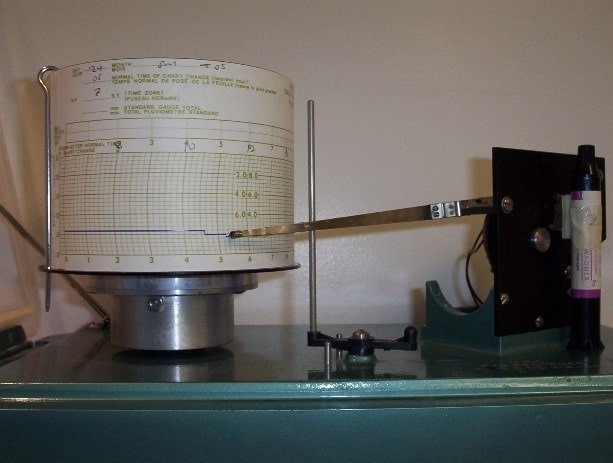 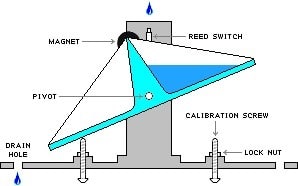 Tipping of bucket completes an electric circuit causing the movement of pen to mark on clock driven receiving drum which carries a recorded sheet. These electric pulses generated are recorded at the control room far away from the rain gauge station. This instrument is further suited for digitalizing the output signal.

The working of this type of rain gauge is similar to weighing bucket rain gauge. A funnel receives the water which is collected in a rectangular container. A float is provided at the bottom of container, and this float raises as the water level rises in the container. Its movement being recorded by a pen moving on a recording drum actuated by a clock work. 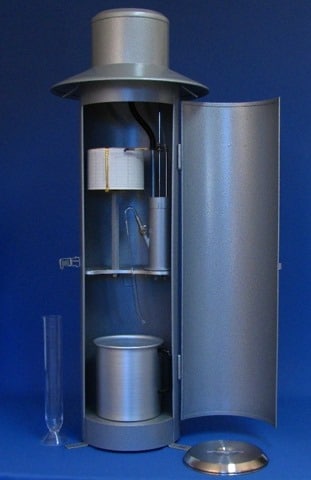 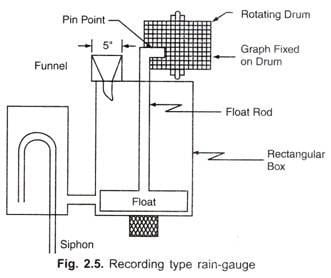 When water rises, this float reaches to the top floating in water, then syphon comes into operation and releases the water outwards through the connecting pipe, thus all water in box is drained out. This rain gauge is adopted as the standard recording rain gauge in India and the curve drawn using this data is known as mass curve of rain fall.