The necessity to provide adequate cover thickness to control corrosion needs no emphasis. A cover thickness survey is useful to determine existing cover thickness in a specified location, where a damage has been identified and elsewhere, for comparison on the same structure.

Table 1 shows how the cover reading are to be interpreted for corrosion assessment.

Corrosion being an electrochemical phenomenon, the electrode potential of steel wire with reference to standard electrode undergoes changes depending on corrosion activity.

A schematic survey on well-defined grid points gives useful information on the presence or probability of corrosion activity. The same grid points are used for other measurements, namely, rebound hammer and UPV could be used for making the data more meaningful. The common standard electrodes used are:

The measurement consists of giving an electrical connection to the rebar and observing the voltage difference between the bar and a reference electrode in contact with concrete surface. (Fig. 1. (a)) 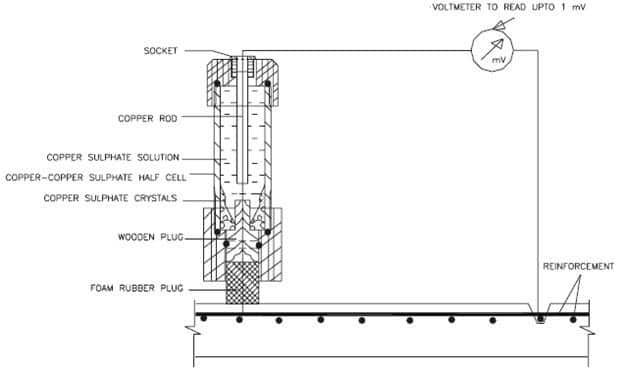 Fig-1 (a): Half Cell Potential Test

The general guidelines for identifying the probability of corrosion based on half cell potential values are suggested as in ASTM C876 are given in Table 2.

In any case, the technique should never be used in isolation, but should be coupled with measurements of chloride content of the concretes and its variation with depth and also the cover to the steel and the depth of carbonation.

However, a systematic “potential mapping survey” is considered to be more useful for on-site identification of the Corrosion State of rebars. This will facilitate setting out potential profile or potential contour. A typical potential contour is shown in fig.1 (b) and (c).

Initially when potential surveying was introduced as per ASTM C 876, each reading was interpreted in isolation and the numerical value was directly correlated to the degree of corrosion. Subsequently, this approach was realised to be erroneous because non-corroded steel can exhibit a wide range of potential values.

It is now realised that potential values should be assessed not in isolation but as a group and the inter relationship of the potentials within a group should form the basis of interpretation.

Analysis of potential contour will generally consist of identifying the locations with accumulated potential lines indicating to the corroding areas beneath. 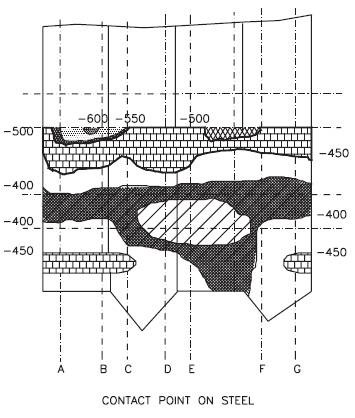 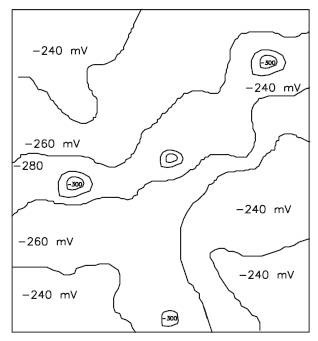 Fig: 1 (b) and (c) Typical Half Cell Potential Contours

Locating at a glance, the anodic areas identified by the gathering of isopotential lines having more severe potential gradient. Ascertaining whether or not a structure is actively corroding.

It is necessary to realise certain important parameters (listed below) which influence the measured potentials of the reinforcement.

The electrical rsistance of concrete plays an important role in determining the quality of concre from the point of view ‘corrosion susceptibility potential’ at any specific location. This parameter is expressed in terms of “Resistivity” in ohm-cm.

For general monitoring, a resistivity check is important because long-term corrosion can be anticipated in concrete structures where accurately measured values are below 10000 ohm-cm. further if resistivity values fall below 5000 ohm-cm, corrosion must be anticipated at a much earlier period (possibly within 5 years) in the life of a structure.

Table 2 indicates the general guidelines of resistivity values based on which areas having probable corrosion risk can be identified in concrete structures.

The principle of resistivity testing in concrete is similar to that adopted in soil testing. However when applied in concrete, a few drawbacks should be realised.

The method essentially consists of using a 4-probe technique in which a known current is applied between two outer probes 100 mm apart and the voltage drop between the inner two elements at 50mm spacing is read off allowing for a direct evaluation of resistance, R.

Using a mathematical conversion factor, resistivity is calculated as per principle of four probe resistivity testing illustrated in figure2. 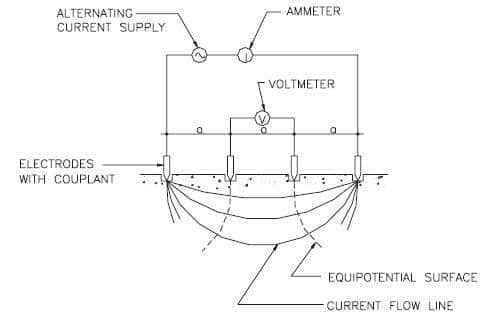 The following drawbacks are important to note while analysing and interpreting the resistivity values:

Table-3: Corrosion Probability based on Resistivity and Potential Mapping 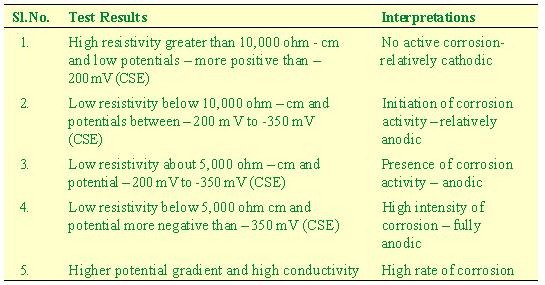 In reinforced concrete structures, determination of actual rate at which the reinforcement is corroding assumes larger importance since the laboratory results are not directly applicable to field conditions.

Another form of the polarization method has been developed and is known as Linear Polarisation Resistance (LPR) method for the on-site study of corrosion rates of steel in concrete.

The fundamental principle of linear polarization is based on the experimentally observed assumption that for a simple model corroding system, the polarization curve for few millivolts around the corrosion potential obeys a quasi-linear relationship. The slope of this curve is the so called polarization resistance

From this slope, the corrosion rate can be determined using stern-Geary equation

Where B is a constant which is a function of the Tafel slopes and ba, bc and determined from the formula below:

The value of B usually lies between 13 and 52 mV depending on the passive and active corroding system. For on-site measurements, the testing system consists of a potentiostat, counter electrode, reference electrode and the reinforcement as working electrode. This system is schematically illustrated in fig. 3. 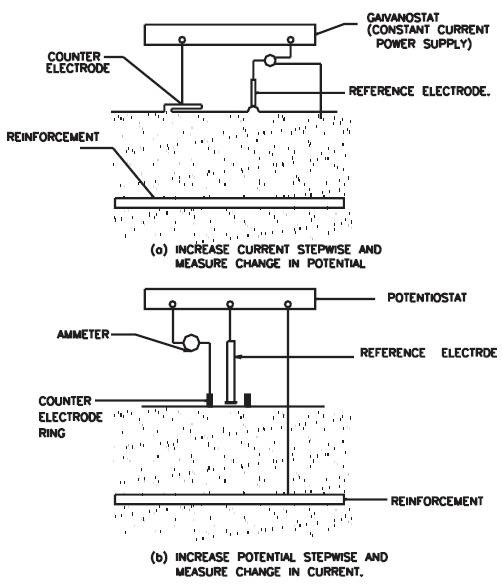 A typical plot of linear polarization curve is shown in fig.4.

It is necessary that for measurements in concrete, the potentiostat should have electronic ohmic compensation (IR drop) or otherwise, the valies to be obtained by calculation or separate experiments. 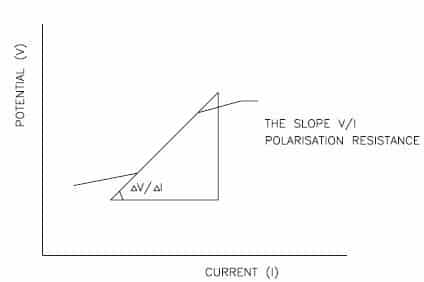 Half cell potential measurement method is used for finding out the status of corrosion actively in the embedded steel.

ADMIN
Gopal Mishra is a Civil Engineer from NIT Calicut and has more than 10 years of experience in Civil Engineering and Construction. He is the founder of The Constructor.
Previous article Determination of Shrinkage Limit of Remoulded Soil
Next article FIRE DAMAGE ASSESSMENT OF BUILDINGS