Compaction of soil is a process of densification of soil by displacing air from the pores by applying external stress on soil at different moisture content.

At low water content, the soil is stiff and offers more resistance to compaction. As the water content is increased, the soil particles get lubricated. The soil mass becomes more workable and the particles have closer packing.

The effect of water content on the compaction of soil can also be explained with the help of electrical double layer theory. At low water content, the forces of attraction in the adsorbed water layer are large, and there is more resistance to movement of the particles.

As the water content is increased, the electrical double layer expands and the inter-particle repulsive forces increase. The particles easily slide over one another and are closely packed. This results in higher dry density.

At a water content more than the optimum, the volume of air voids become almost constant and the effect of increased compaction on soil is not significant.

The line of optimums which join the peaks of the compaction curves of different compactive efforts follows the general trend of the zero-air void. This line corresponds to air voids of about 5%.

The compaction of soil depends upon the type of soil. The maximum dry density and the optimum water content for different soils are shown in figure. In general, coarse grained soils can be compacted to higher dry density than fine-grained soils.

With the addition of even a small quantity of fines to a coarse-grained soil, the soils attain a much higher dry density for the same compactive effort.

However, if the quantity of the fines in increased to a value more than that required to fill the voids of the coarse-grained soils, the maximum dry density decreases. A well graded sand attains a much higher dry density than a poorly graded soil.

For example, in Harvard Miniature compaction test, the soil is compacted by the kneading action, and therefore, the compaction curve obtained is different from that obtained from the other conventional tests in which an equal compactive effort is applied. 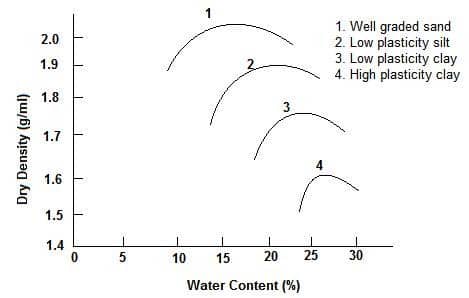 Compaction of Soil – Test Methods and Effect on Properties of Soil

Proctors Test for Compaction of Soil – Tools, Procedures and Results

Gopal Mishra is a Civil Engineer from NIT Calicut and has more than 10 years of experience in Civil Engineering and Construction. He is the founder of The Constructor.
Previous article Pervious Concrete: Futuristic Solution to Urban Runoff?
Next article Steps in Bituminous Road Construction 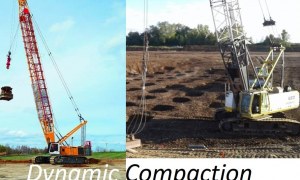