The constant head permeability test is a laboratory experiment conducted to determine the permeability of soil. The soils that are suitable for this tests are sand and gravels. Soils with silt content cannot be tested with this method.The test can be employed to test granular soils either reconstituted or disturbed.

Coefficient of permeability helps in solving issues related to:

What is Coefficient of Permeability?

The coefficient of permeability, k is defined as the rate of flow of water under laminar flow conditions through a porous medium area of unit cross section under unit hydraulic gradient.

The coefficient of permeability (k) is obtained from the relation 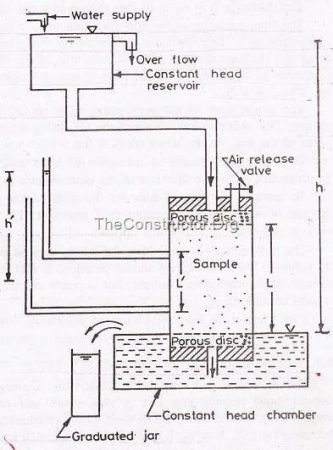 Initially, the flow is very slow. It later increases and will become constant. The constant head permeability test is best for cohesionless soils.

The data that is obtained directly from the tests are:

The dry density and void ratio have to be reported along with the test results.

ADMIN
Gopal Mishra is a Civil Engineer from NIT Calicut and has more than 10 years of experience in Civil Engineering and Construction. He is the founder of The Constructor.
Previous article FIRE DAMAGE ASSESSMENT OF BUILDINGS
Next article Determine Unconfined Compressive Strength of Cohesive Soil