Routing and Sealing of Cracks in Concrete

Home / How To Guide /Routing and Sealing of Cracks in Concrete

Routing and sealing of cracks in concrete can be used for dormant cracks not involving the restoration of tensile strength. In this method the crack is enlarged along its exposed face to form a V-shaped groove up to a minimum width of 6 mm and a depth of 6 to 25 mm.

The groove thus formed is filled and sealed with suitable material. For relatively lower performance of repair but to get quicker work, the routing operation can be omitted. The surface of the repair material can be higher than that of the adjacent concrete decreasing the level of aesthetic appearance.

This method is commonly used for both fine pattern cracks and large isolated but dormant cracks. On roadway pavements, pouring hot tar within the cracks is a simple and inexpensive method. When hot-poured joint sealants are used, it is made sure that they bond with the concrete and do not melt and flow under operating conditions.

In pavements, the grade of the sealant must be such that it can bear the moving traffic without any damage. The groove over the crack may be made with hand-held tools, concrete saw or pneumatic tools, which is then cleaned by air blasting, sandblasting, or water-jetting to remove grease, oil or dirt. After cleaning with water, the surface must be dried before the application of the sealant. 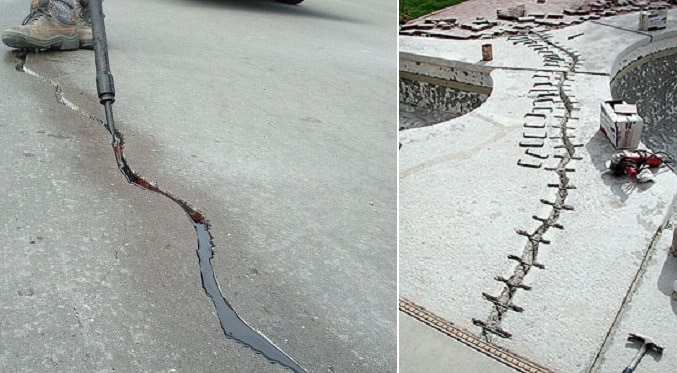 The procedure works the best for flat horizontal surfaces but can also be used on vertical and curved surfaces when a non-sag sealant is employed. A common and effective use of this technique is to waterproof the concrete surface where water stands.

The sealants may be any material that is able to bear cyclic expansion and contraction and which does not become brittle with time, including epoxies, urethanes, silicones, polysulfides, asphaltic materials, or polymer mortars.

Cement grouts are avoided due to the chances of future cracking. A sealant is placed into the dry groove and allowed to cure. In case it is desired that the sealant must move freely without any resistance at the bottom, a bond breaker in the form of polyethylene strip or tape, waxed paper and foil may be provided at the bottom of the groove.

The groove in such applications is made rectangular and great care is exercised to not debond the sealant from the side surfaces.

In some cases, strip coating or over-banding (having width of 25 to 75 mm on each side of the crack and thickness of 1 to 2 mm) may be applied over the repair surface obtained after routing and sealing to reduce chances of edge spalling and to make the treatment more uniform

The coating can be of urethane in the form of a band. The process when used on a larger scale is sometimes called blanketing.

Elastic sealant is a material which returns to its original shape when external stresses are removed. The groove formed at top of crack to receive the sealant is called “chase”. A bond breaker is required to be provided at the bottom of the chase for elastic sealants.

The width and depth of the chase are decided such that the tensile stress in the sealant material due to the movement in the crack should not exceed the cohesive capacity of the material with a safety factor of 5 to cover aging and fatigue.

The minimum depth of the chase is 20 to 25 mm. Usually rectangular chase is preferred for elastic sealants.

If any reinforcement is exposed during cutting for the chase, the depth of chase is increased such that the sealant can go behind the reinforcement bars. Clean the bars and coat with bitumen before placing the elastic sealant.

The quality of the sealant can be checked in the field by pulling a layer of the sealant. The failure must be by stripping away a skin of mortar or through the sealant itself, but no separation should occur between the mortar and the sealant.

Sealing of Various Types of Joints in Building Construction

ADMIN
Gopal Mishra is a Civil Engineer from NIT Calicut and has more than 10 years of experience in Civil Engineering and Construction. He is the founder of The Constructor.
Previous article Surface Preparation for Concrete Repair
Next article How to Repair Off-Center Footings during Building Construction?