Surveying is the process of determining relative positions of different objects on the surface of the earth by measuring horizontal distances between them and preparing a map to any suitable scale.

Measurements are taken in horizontal plane only. Surveying is the art of determining the relative positions of points on, above or beneath the surface of the earth by means of direct or indirect measurements of distance, direction and elevation.

Survey is performed to prepare a map of relative positions on surface of the earth. It shows the natural feature of a country such as towns, villages, roads, railways, etc. They may also include details of different engineering works such as bridge, canal, dam etc.

The fundamental principle upon which the various methods of plane surveying are based can be stated under the following two aspects.

Location of a point by measurement from two points of reference

According to this principle, the relative position of a point to be surveyed should be located by measurement from at least two points of reference, the positions of which have already been fixed. 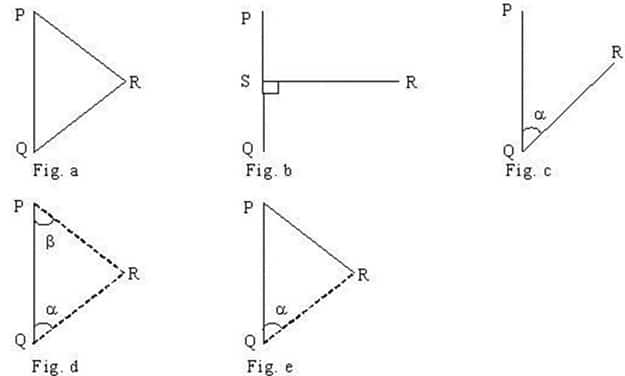 If P and Q are the two reference points on the ground, any other point, such as R, can be located by any of the direct methods shown in the above figures. But, although a single method is sufficient to locate the relative position of ‘R’ with respect to reference points P and Q, it is necessary to adopt at least any two methods to fix the position of point ‘R’.

Working from whole to part 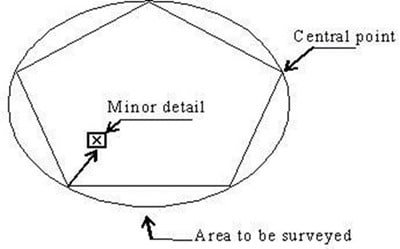 According to this principle, it is always desirable to carryout survey work from whole to part. This means, when an area is to be surveyed, first a system of control points is to be established covering the whole area with very high precision. Then minor details are located by less precise methods.

The idea of working this way is to prevent the accumulation of errors and to control and localize minor errors which, otherwise, would expand to greater magnitudes if the reverse process is followed, thus making the work uncontrolled at the end.

Method of Surveying in Civil Engineering

Primary types of Surveying are:

Geodetic survey is conducted by survey department of the country. It is that type of surveying in which the curved shape of the earth is taken in to account. The object of geodetic survey is to determine the precise position on the surface of the earth, of a system of widely distant points which form control stations in which surveys of less precision may be referred. . Line joining two points is considered as curved line and angles are assumed as spherical angles. It is carried out if the area exceeds over 250 km2.

Surveys may be classified based on the nature of the field of survey, object of survey and instruments used.

1) Surveying based on Nature of Survey

They are carried out determine the position of natural features of a region such as rivers, streams, hills etc. and artificial features such as roads and canals. The purpose of such surveys is to prepare maps and such maps of are called topo-sheets.

The Astronomical Survey is carried out to determine the absolute location of any point on the surface of earth. The survey consists of making observations to heavenly bodies such as stars.

This type of survey is undertaken whenever sufficient data is to be collected for the purpose of planning and designing engineering works such as roads, bridges and reservoirs.

This type of survey is carried out to gather information about sites that are important from archeological considerations and for unearthing relics of antiquity.

In this type of survey, information is collected by taking photographs from selected points using a camera.

In this type of survey data about large tracks of land is collected by taking photographs from an aero-plane.

In this type of survey, data is collected by marking physical observation and some measurements using simple survey instruments.

2) Surveying based on Type of Instruments

Chain surveying is the basic and oldest type of surveying. The principle involved in chain survey is of triangulation. The area to be surveyed is divided into a number of small triangles. Angles of triangles must not be less than 30 degree and greater than 120 degree. Equilateral triangles are considered to be ideal triangles. No angular measurements are taken, tie line and check lines control accuracy of the work.

This method is suitable on level ground with little undulations and area to be survey is small. 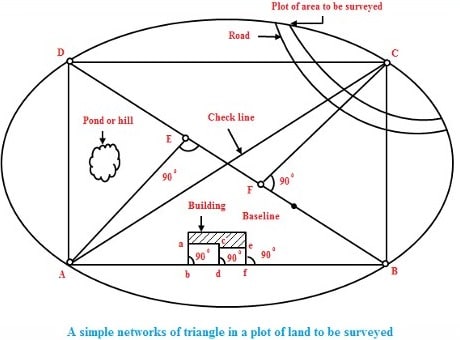 Compass survey uses the principle of traversing. This method does not requires the need to create triangles. It uses a prismatic compass for measuring magnetic bearing of line and the distance is measured by chain. A series of connecting lines is prepared using compass and measuring distances using chain. Interior details are located using offset from main survey lines.

They suitable for large area surveying crowded with many details. It can be used to survey a river course.

The principle of plane table survey is parallelism. They are plotted directly on paper with their relative position. The rays are drawn from station to object on ground. The table is placed at each of the successive station parallel to the position of the last station.

They are basically suitable for filling interior detailing and is recommended when great accuracy is not required. 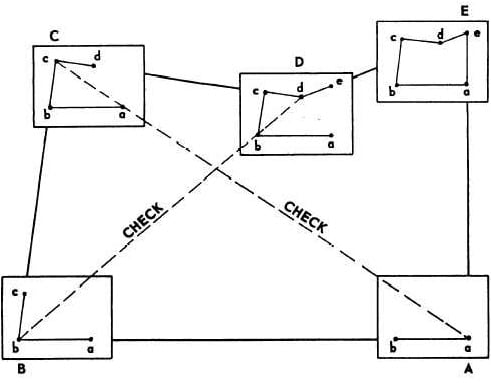 The theodolite is an instrument used mainly for accurate measurement of the horizontal and vertical angles. They are accurate to measure up to 10″ or 20″ angles.

Theodolite can be used to measure: 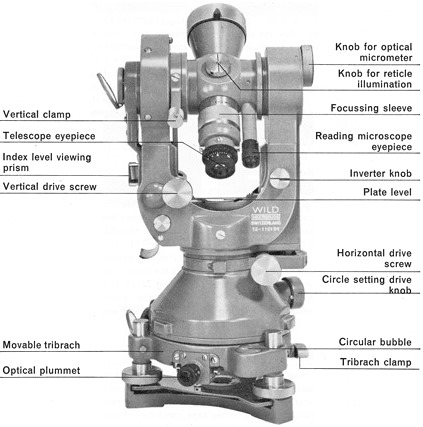 Tacheometry is a branch of surveying in which horizontal and vertical distances are determined by taking angular observations with an instrument known as a tacheometer. Tacheometer is nothing but a transit theodolite fitted with a stadia diaphragm and an anallatic lens. There is no need for chaining in such survey. The principle of Tacheometer is based on property of isosceles triangle, where ratio of the distance of the base from the apex and the length of the base is always constant.

Photographic survey is based on technique of taking photographs from different angle to prepare topographic details with relative high speed.

There are two type of photographic surveying

i). Terrestrial or ground photogrammetry

In terrestrial photogrammetry maps are prepared from ground photographs from different points on the earth surface for measurement purpose.

In aerial photogrammetry maps are produced from air from an airplane or helicopter.

Metrical photogrammetry is of principal interest to surveyors since it is applied to determine distances, elevations, areas, volume, etc. to compile topographic maps made from measurements on photographs. 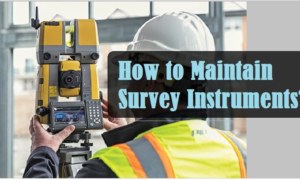