High-performance steels, which are becoming increasingly available, are well suited for highway bridge applications due to their high strength, excellent toughness, as well as good weld ability and corrosion resistance.

These steels have the potential to produce considerable weight savings, although impediments to their effective use in conventional stiffened flat web plate girders include the potential for web instability, excessive deflections, and fatigue failure.

To overcome these limitations, innovative designs have been proposed, including the use of corrugated webs to provide enhanced shear stability and eliminate the need for transverse stiffeners.

The corrugated steel plate is a widely used structural element in many fields of application because of its favorable properties and has been applied since the 1920s. It was firstly used in aircraft structures with very thin web panels, then, extended for civil engineering applications in buildings and bridges.

For the last 20 years, it has been increasingly used in the web of steel and composite bridges. The Cognac Bridge built in France is the world’s first corrugated steel web bridge completed in 1986. It is a three-span continuous box girder bridge with total length 0f 105m and maximum span of 43m. 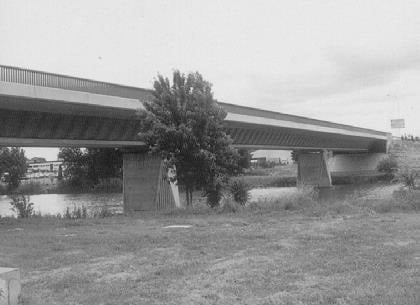 The use of corrugated webs has been considered for a long time to increase the buckling strength and out-of-plane stiffness eliminating the use of vertical stiffeners. It was, however, found that the girders with corrugated webs are economic to use and can improve the aesthetics of the structure.

As shown in Fig.1.2, the corrugated web bridge, in which the webs of conventional prestressed concrete bridges were replaced by corrugated steel webs.

The corrugated web girder structural system consists of thin-walled corrugated webs and flange. In the case of plate girder bridges with flat webs, they have the maximum moment carrying capacity than any rolled sections.

To carry the moments, the section has to be slender and the slender sections are susceptible to web buckling. So the web loses its buckling strength. Hence to avoid this buckling and to gain maximum strength the focus was on the provision of corrugations on the web.

The purpose of using the corrugated web is that it allows the use of thin plates without the need of stiffeners reducing the cost of fabrication and improves fatigue life. . It has been estimated that these girders with corrugated webs may be 9 to 13% lighter than the conventional stiffened girders with flat webs. 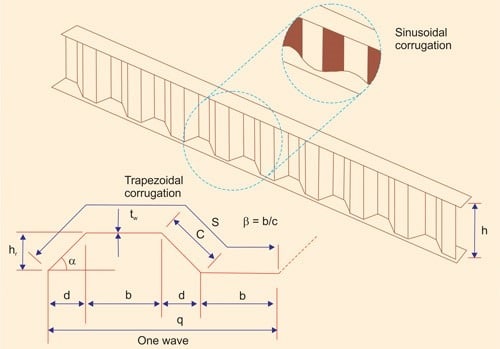 Fig.2.1 Profile of a girder with corrugated web

For making the cross section efficient to resist in-plane bending it is required that maximum material must be placed as far away from neutral axis as possible. As the depth of the section increases, depth of the web increases and it becomes slender, premature failure of girder due to web buckling in shear may occur.

Hence to reduce the slenderness ratio created by the high depth and small thickness of the web, instead of using stiffeners, the corrugated web is the possible way to give stability against elastic buckling of the web. The profile is such a way that it avoids failure of the beam due to loss of instability before the web ultimate load is reached by web yielding.

The flexural strength of girder with corrugated web plate is provided by the flanges with almost no contribution from the web and no interaction between flexure and shear behavior.

The corrugated steel web solely provides the shear capacity of the girders where the shear strength is controlled by buckling and/or steel yielding of the web. The flanges provide boundary supports for the web.

This concludes the corrugated steel plate does not resist axial forces and bending moment but has high resistance to shear buckling as shown in the fig.3.1. This effect can be defined as an accordion effect.

In the case of prestressed concrete bridge girders, the accordion effect enables the upper and lower decks of the girder to be prestressed efficiently. Hence the loss of prestressing is reduced considerably compared to conventional box girder bridges.

The axial force and bending moment distribution across the cross section of a box-girder is shown in the fig.4.2. Here the flanges of the box girder are made of concrete and the concrete webs are replaced by corrugated steel webs. The figure shows that there is the negligible contribution of the corrugated webs on the axial force and the bending moment on the girder.

Based on the experiments and the analysis carried out to date, it has been confirmed that the applied shear force is completely resisted by the corrugated steel webs. The shear strength of the corrugated web is a primary function of web height, thickness, the corrugation geometry, and web imperfections also play an important role.

As mentioned before the corrugations provide stability to the web, eliminating the need for transverse stiffeners that have a primary influence on the shear strength of conventionally stiffened flat web plate girders. 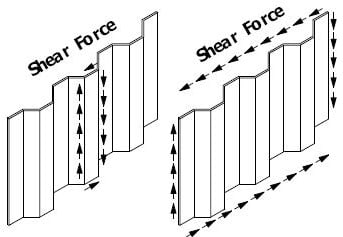 Corrugated webs do not carry significant longitudinal stresses from primary flexure of the girders. Hence shear strength can be determined without consideration of moment shear interaction. Hence design is carried out by assuming all the shear forces are resisted by corrugated webs. The shear force distribution is shown in the fig.3.4

The shear force applied to a girder with corrugated steel webs is resisted primarily by the webs and the stresses in the corrugated webs are almost pure shear stresses, the instability problem of this type of bridge often boils down to the shear buckling of the corrugated webs.

The stability of corrugated steel web can be assured by appropriate design of the form and wavelength of the corrugations. Normally the minimum web thickness is determined taking into account the corrugations and allowable shear stress needed.

A local buckling mode corresponds to the instability of a steel strip simply supported between two folds under uniform shear. It is critical only for deep folds. In the local buckling, the corrugated web act as a series of flat panels that mutually support each other along their vertical edges and are supported by the flanges at their horizontal edges. 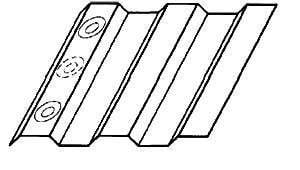 Global buckling mode of corrugated webs is the mode in which the entire corrugated steel web buckles. This mode is critical in webs with shallow folds. 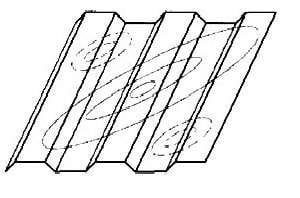 Global buckling modes involve multiple folds and the buckled shape extends diagonally over the depth of the web.

When the cross-sections distort, it reduces the torsional warping stresses. Therefore, when PC box girder bridges with corrugated steel webs are adopted for curved or skewed bridges, it is necessary to provide diaphragms at suitable intervals to control any cross-sectional distortion.

The corrugated steel webs, which take advantages of steel and concrete, have proved to be one of the promising solutions that can reduce the self-weight of main girders, thereby enabling the use of longer spans and reduction of construction cost. Even though corrugated web girders are still new and less than 10 bridges have been built worldwide, the provided benefits have the potential of significant economic advantages for upcoming projects.

EDITOR
Neenu is a Civil and Structural Engineer and has experience in Design of Concrete and Steel Structures. She is an Author, Editor and Partner at theconstructor.org.
Previous article Concrete Mix Design Calculation for M20, M25, M30 Concrete with Procedure & Example
Next article Surveying Principles and Methods in Civil Engineering