Sorry, you do not have a permission to ask a question, You must login to ask question. Get the paid membership

Do you need to remove the ads? Get the paid membership

It is advisable to know suitability of each types of foundation before their selection in any construction project.

Types of Foundation and their Uses

Following are different types of foundations used in construction:

Individual footing or an isolated footing is the most common type of foundation used for building construction. This foundation is constructed for single column and also called as pad foundation.

The shape of individual footing is square or rectangle and is used when loads from structure is carried by the columns. Size is calculated based on the load on the column and safe bearing capacity of soil.

Rectangular isolated footing is selected when the foundation experiences moments due to eccentricity of loads or due to horizontal forces.

Combined footing is constructed when two or more columns are close enough and their isolated footings overlap each other. It is a combination of isolated footings, but their structural design differs.

The shape of this footing is rectangle and is used when loads from structure is carried by the columns.

Spread footings are those whose base is more wider than a typical load bearing wall foundations. The wider base of this footing type spreads the weight from the building structure over more area and provides better stability.

Spread footings and wall footings are used for individual columns, walls and bridge piers where the bearing soil layer is within 3m (10 feet) from the ground surface. Soil bearing capacity must be sufficient to support the weight of the structure over the base area of the structure.

These should not be used on soils where there is any possibility of ground flow of water above bearing layer of soil which may result in scour or liquefaction.

Raft or mat foundations are the types of foundation which are spread across the entire area of the building to support heavy structural loads from columns and walls. 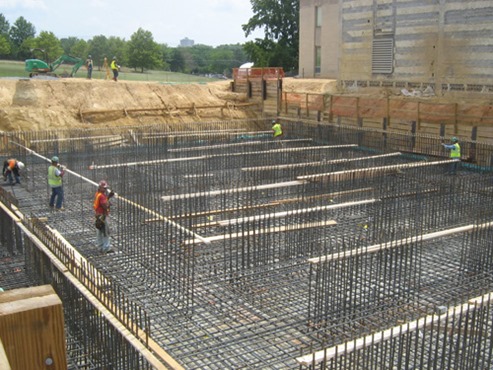 The use of mat foundation is for columns and walls foundations where the loads from structure on columns and walls are very high. This is used to prevent differential settlement of individual footings, thus designed as a single mat (or combined footing) of all the load bearing elements of the structure.

These foundations should not be used where the groundwater table is above the bearing surface of the soil. Use of foundation in such conditions may lead to scour and liquefaction.

Pile foundation is a type of deep foundation which is used to transfer heavy loads from the structure to a hard rock strata much deep below the ground level.

Pile foundations are used to transfer heavy loads of structures through columns to hard soil strata which is much below ground level where shallow foundations such as spread footings and mat footings cannot be used. This is also used to prevent uplift of structure due to lateral loads such as earthquake and wind forces.

Pile foundations are generally used for soils where soil conditions near the ground surface is not suitable for heavy loads. The depth of hard rock strata may be 5m to 50m (15 feet to 150 feet) deep from the ground surface.

Pile foundation resists the loads from structure by skin friction and by end bearing. Use of pile foundations also prevents differential settlement of foundations.

Drilled shafts, also called as caissons, is a type of deep foundation and has action similar to pile foundations discussed above, but are high capacity cast-in-situ foundations. It resists loads from structure through shaft resistance, toe resistance and / or combination of both of these. The construction of drilled shafts or caissons are done using an auger. 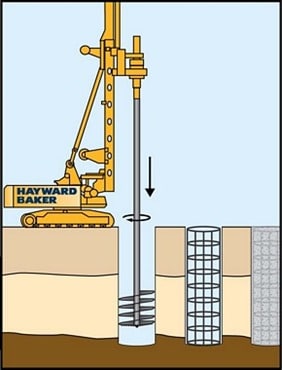 Drilled shafts can transfer column loads larger than pile foundations. It is used where depth of hard strata below ground level is location within 10m to 100m (25 feet to 300 feet).

Drilled shafts or caisson foundation is not suitable when deep deposits of soft clays and loose, water-bearing granular soils exists. It is also not suitable for soils where caving formations are difficult to stabilize, soils made up of boulders, artesian aquifer exists.

Read More: Soil Investigation and Types of Foundations Based on Soil Properties

Gopal Mishra is a Civil Engineer from NIT Calicut and has more than 10 years of experience in Civil Engineering and Construction. He is the founder of The Constructor.
Previous article Environmental Considerations in Site Investigation
Next article Unit Cost Method of Estimation in Construction Projects 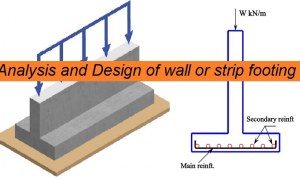 Analysis and Design of RC Wall Footing Based on ACI