Different Test Methods For Workability of Self Compacting Concrete [PDF]

Self-compacting concrete (SCC) is a highly flowable, non-segregating concrete that fills uniformly and completely every corner of formwork by its own weight and encapsulate reinforcement without any vibration, whilst maintaining homogeneity.

A concrete mix can only be classified as self-compacting concrete if the requirements for all below-mentioned characteristics are fulfilled:

So to measure all these parameters following are some of the tests procedure which is recommended by EFNARC.

Test Methods For Workability of Self Compacting Concrete

The slump flow test is done to assess the horizontal flow of concrete in the absence of obstructions. It is the most commonly used test and gives a good assessment of filling ability. It can be used at the site, the test also indicates the resistance to segregation. When the slump cone is lifted, start the stopwatch and find the time taken for the concrete to reach a 500 mm mark. This time is called T50 time. This is an indication of the rate of spread of concrete. 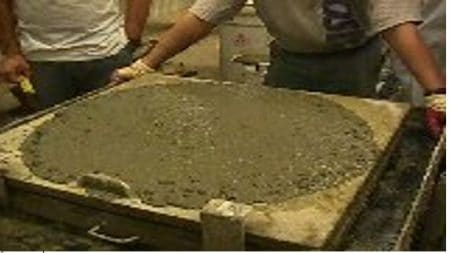 About 6 liters of concrete is needed for this test.

Note that there is no water or cement paste or mortar without coarse aggregate is seen at the edge of the spread concrete.

The higher the flow value, the greater its ability to fill formwork under its own weight. A value of at least 650 mm is required for SCC. In case of severe segregation, most coarse aggregate will remain in the center of the pool of concrete and mortar and paste at the periphery of concrete. If lower T50 time then it indicates greater flowability.

J-ring test denotes the passing ability of the concrete. It is also a common test method at site  The bars and sections in this test can be placed at a different distance apart to simulate the congestion of reinforcement at the site. Generally, these sections are placed 3 times the maximum size of aggregate. The diameter of the ring formed by vertical sections is 300 mm and height 100 mm. 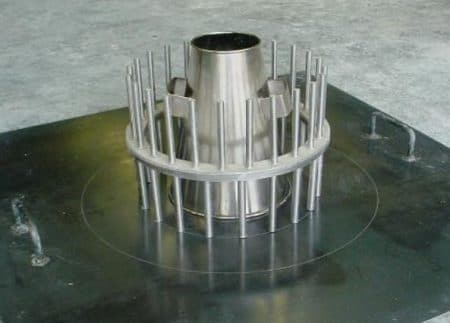 About 6 liters of concrete is needed for the test.

If the concrete has a good passing ability then the spread of concrete with the J ring and without the J ring would be the same or typically a max difference of 50mm in the spread will be observed.

V- Funnel test is used to determine the filling ability (flowability) of the concrete with a maximum size of aggregate 20 mm size. The funnel is filled with about 12 liters of concrete, and the time taken for it to flow down is noted. After this, the funnel can be filled with concrete and left for 5 minutes to settle. If the concrete shows segregation, then the flow time will increase significantly. 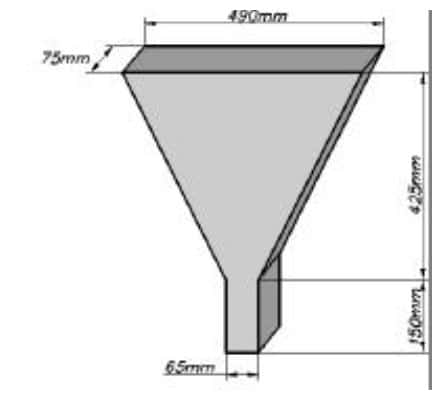 This test measures the ease of flow of the concrete; shorter flow times indicate greater flowability. For SCC a flow time of 10 seconds is considered appropriate.

The inverted cone shape restricts flow, and prolonged flow times may give some indication of the susceptibility of the mix to blocking. After 5 minutes of settling, segregation of concrete will show a less continuous flow with an increase in flow time, for V-funnel test the flow time should be between 8 and 12 seconds. for V- funnel flow time at T5 min.+ 3 seconds is allowed.

The test assesses the flow of concrete and also, the extent to which the concrete is subjected to blocking by reinforcement it is mostly preferred while underwater concreting to be done 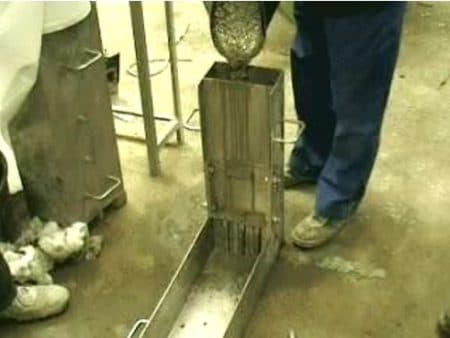 If the concrete flows as freely as water, at rest, it will be horizontal. Therefore H2/H1 will be equal to 1. Therefore, nearer the test values, the blocking ratio, is to unity, the better the flow of concrete minimum acceptable value of 0.8 is preferred. T20 and T40 time can give some indication of ease of flow, but no suitable values have been suggested.

The test is used to measure the filling ability of self-compacting concrete. It consists of a vessel that is divided by a middle wall into two compartments This is a simple test to conduct, but the equipment may be difficult to construct. It provides a good direct assessment of filling ability 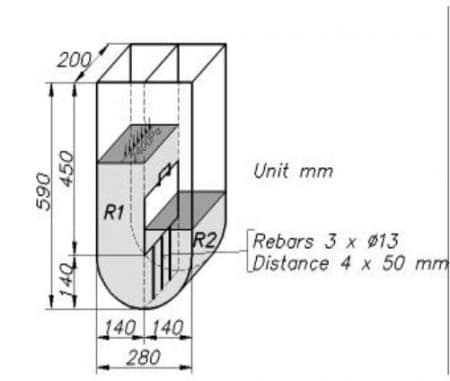 If the concrete flows as freely as water, at rest it will be horizontal, so H1 – H2 = 0. Therefore, the nearer this test value, the ‘filling height’, is to zero, the better the flow and passing ability of the concrete.

Even a concrete mix with a high filling ability will perform poorly if the passing ability and segregation resistance are poor, it is complex and difficult to perform on-site hence not used commonly. 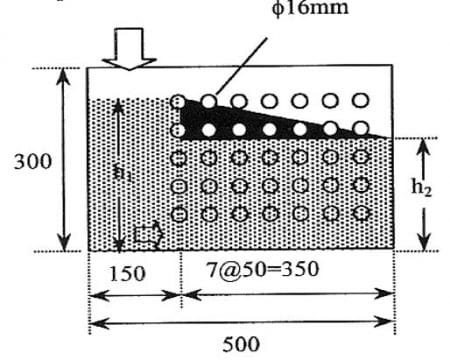 About 45 liters of concrete is needed to perform the test, Moisten the inside surfaces of the apparatus, remove any surplus water, fill the apparatus with the concrete sample.

Fill the container by adding every 5 seconds one scoop with 1.5 to 2 liters of fresh concrete into the funnel until the concrete has just covered the first top obstacle. Measure after the concrete has come to rest, the height at the side at which the container is filled in two places and calculate the average(h1). Do this also on the opposite side (h2). Calculate the average filling percentage as  Average filling

If the concrete flows as freely as water, at rest it will be horizontal, so the Average filling percentage = 100%. Therefore, the nearer this test value, the ‘filling height’, is to 100%, the better the self-compacting characteristics of the concrete.