The portal method is an approximate analysis used for analyzing building frames subjected to lateral loading such as the one shown in Fig.1. This method is more appropriate for low rise buildings with uniform framing.

There are three major assumption that applied in the approximate portal method of analysis. These assumptions are as follow:

1. An inflection point is located at mid-height of each column, Fig. 2.

2. An inflection point is located at the centre of each beam, Fig. 2.

3. The horizontal shear is divided among all the columns on the basis that each interior column takes twice as much as exterior column.

The basis for the third assumption stems from the reasoning that the frame is composed of individual portals as shown in Fig.3.

Obviously an interior column is in effect resisting the shear of columns of the individual portals.

The following example illustrates the procedure involved in the analysis of building frames by the portal frame method.

It is required to determine the approximate values of moment, shear and axial force in each member of frame as shown in Fig. 4, using portal method.

By taking summation of horizontal forces of Fig. 5, the unknown forces can be computed as follow:

Again inflection points are assumed at mid-height of lower storey columns and the shear is distributed as in the upper storey. Thus, in the lower storey, the horizontal forces can be computed using the following expression:

The forces in the members of the lower storey are obtained from the free body diagrams of Fig. 7. The maximum moment in each member of the structure is readily obtained once the value of shear at the inflection points have been determined.

The moment diagram drawn on the frame on the tension side of the members is shown in figure 4. The maximum values of shear and axial forces are indicated along each member. The shears are shown without any sign. The positive value of the axial force indicates tension.

Gopal Mishra is a Civil Engineer from NIT Calicut and has more than 10 years of experience in Civil Engineering and Construction. He is the founder of The Constructor.
Previous article Compaction and Roller Requirement for Embankment and Subgrade
Next article CHARACTERISTICS OF A CONSTRUCTION PROJECT 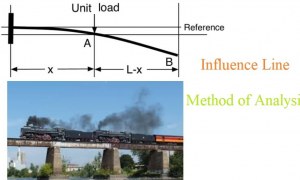 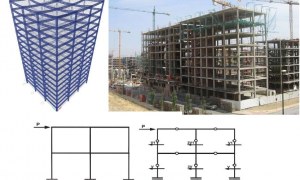