Qualitative structural analysis might not be familiar to structural engineers. The usual way of analysis of structures is numerical (quantitative) method in which the structural designers should determine values for dimensions and loads and compute bending moments and reactions.

However, there is an important step before numerical structural analysis that is called preliminary analysis. In this stage dimensions of elements should be assumed before analysis is performed.

Naturally, the detailed numerical analysis is to check values that have been employed in the preliminary analysis. Therefore, unless the structural elements sized correctly, the analysis has to be repeated many times regardless of using computer or hand calculation. This could be time consuming and costly and the designer should try to avoid this situation.

By and large, it is considered that required knowledge and skills to carry out suitable and correct preliminary analysis comes from researching and studying techniques of numerical analysis, but this might not be the case.

Qualitative structural analysis provides the necessary skills and knowledge to perform preliminary analysis. The foundation of these skills is to understand or recognize relations between loads and resulting structural behaviors.

For example, in simple elements the basic skills are to recognize the relationships between loads, deflected shape and resulting reactions.

Qualitative structural analysis is substantially different from quantitative method. Not only it does not have a specific solution procedure but also it depends on a number of diagrams.

In qualitative analysis the procedure depends on the problem for example, in a specific problem starting solution from deflected shape could be suitable while for other problems beginning from bending moment diagram is effective to get the solution.

Table 1 Types of supports and their reactions 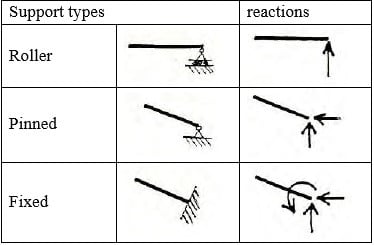 2. Moment at the hinge is equal to zero.

3. Remember: moment is equal to force multiply by distance.

4. Draw bending moment diagram on the tension side of the beam to keep consistent answers.

5. For all loading cases, the structure remains in the elastic ranges of material behavior. Stress is proportional to strain and deflections are directly proportional to loads (first assumption of elastic analysis of structures).

6. Deflections resulting from loading do not lead to develop secondary bending moments. As shown in Figure 1 ABC is a cantilever that carries two loads W1 & W2. The W2 develop bending moment at BC that leads to a horizontal deflection at B, which is called

is neglected. (Second assumption of elastic analysis of structures). 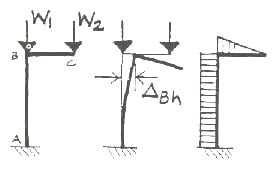 8. Principle of superposition, which helps to simplify complex structure and examine loads differently, is considered to apply provided that the structure remains in elastic range.

These two diagrams provide the solution of the original two span beams. Similarly, deflections could be treated in the same manner. 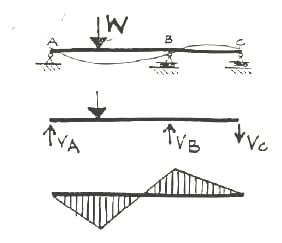 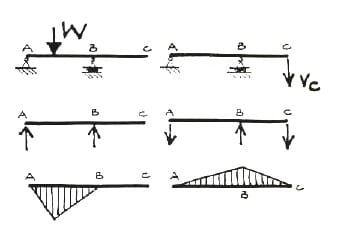 Figure 3: Remove reaction at C (left side), remove W and recall reaction C right side, and solve both to get the original solution

9. There is no bending moment in the part of the structure that remains straight after loading, however it could move.

10. Bending moment diagrams will be straight lines if applied loads were point loads.

11. Bending moment diagrams will be curved if applied loads were distributed loads.

12. At simply supports, bending moment is equal to zero.

14. Unbraced frames will not sway if it is symmetrical and symmetrically loaded.

15. Qualitative analysis is carried out for visible loads, therefore self weight is neglected.

16. Apart from at hinges, shapes of deflected elements are extremely smooth.

17. In frames, angles of rigid joints should maintain the original angles after loadings as shown in Figure 4.

18. In frames, rigid joints might close or open only as shown in . 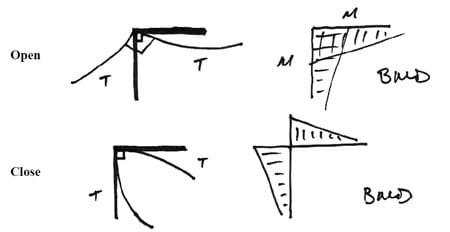 19. There is only one moment value in the rigid joints that connects two elements. 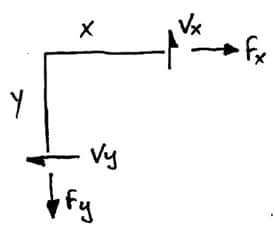 However, this is not the case in the oblique angle join as shown in Figure 7 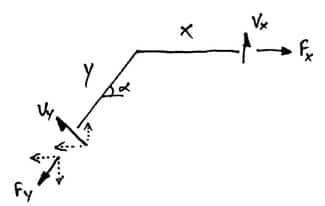 21. In rigid joints in which there are more than two members, the joint must be in equilibrium. As shown in Figure 8, in the following joint MA = MB+MC 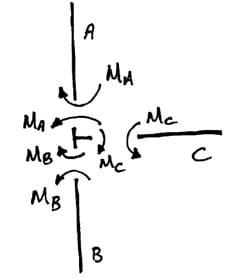 Figure 8: Equilibrium rigid joint in which three members are meet.

A complete solution of qualitative structural analysis is composed of:

EDITOR
Madeh is a Structural Engineer who works as Assistant Lecturer in Koya University. He is the author, editor and partner at theconstructor.org.
Previous article How to be Successful in your Civil Engineering Career?
Next article Concrete Admixtures (Additives)- Types, Selection, Properties, Uses